Drama in Abuja as Saraki, Ekweremadu locked up in residences

High political drama is playing out in Abuja, Nigeria’s political capital as the Senate President, Dr. Bukola Saraki, and his deputy, Ike Ekweremadu have been locked up in their residences by a combined team of policemen and Economic and Financial Crimes Commission (EFCC) agents. 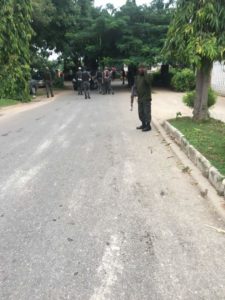 Entrance to Ekweremadu’s residence this morning.

No reason has been given for the barricading of the road and entrances leading to their residences.
But aides of the principal officers of the National Assembly released photos and videos of security men blocking toads and entrances to the residences.
Saraki has an appointment to keep with the Police, following an invitation by the Inspector-General of Police, Ibrahim Idris, in furtherance of investigations into the Offa banks robbery that claimed tens of lives. Idris asked him to report to an investigation team at Guzape District in the city.
The Senate President has said it is a political move by government to stop his alleged defection from the All Progressives Congress (APC).
Ekweremadu’s angle still caught many by surprise, but there were postulations that he was being kept away from the Senate Chambers to prevent him from presiding.
A source close to him said it is part of a grand design to effect the impeachment of Saraki, who can only be removed by two-thirds of Senators.
More details soon…

EFCC, Police, Lay Siege to Ekweremadu’s Residence…No going in or out