President Muhammadu Buhari has been elected the Chairman of the Economic Community of West African States in Lone, the capital of Togo.
A post by one of his aides, Bashir Ahmed, on Twitter first announced the emergence of Buhari. 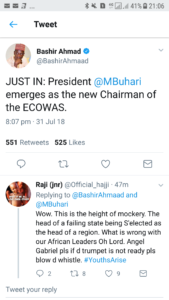 The Nigeria Television Authority (NTA) reported Tuesday night that though the President resisted the office, his fellow Heads of State put pressure on him to accept.
Reporting earlier today, online newspaper, TheCable said that barring any last-minute change in plans, President Muhammadu Buhari will vie for the chairmanship of the Economic Community of West African States (ECOWAS) in Lome, Togo.
It reports further: “A new chairman will succeed President Faure Gnassingbe of Togo at the end of the 53rd Ordinary Session of the ECOWAS Authority of Heads of State and Government.
“Buhari departed Abuja on Sunday for Lome in company with a team of two governors and five ministers.
“Also in the delegation are Babagana Monguno, the national security adviser (NSA); Abayomi Olonisakin, chief of defence staff; Ahmed Abubakar, the DG of the National Intelligence Agency (NIA); and Godwin Emefiele, governor of the Central Bank of Nigeria (CBN).
“Diplomatic sources told TheCable that Buhari was prevailed upon Monday night by some West African countries to go for the position.
“Other countries that initially showed interested in the chairmanship are Ghana, Sierra Leone and Cape Verde.
“A diplomatic source told TheCable: “At a dinner on Monday night, some of the West African diplomats had a long discussion with Buhari and persuaded him to run.”
“TheCable had learnt at the weekend that the president was interested in the position, but senior government officials denied knowledge of it.

“It is still unclear if President Nana Akufo-Addo of Ghana will be throwing his hat in the ring.”

Why I am leaving APC for PDP – Saraki