Abuja’s Chinese-built N251 billion railway system was Thursday inaugurated by President Muhammadu Buhari at the city’s metro station in the Central Business District.  It was not clear if residents are to enjoy a two-week free ride as earlier promised.
However, Federal Capital Territory Minister, Mallam Muhammad Bello, said the commissioning ceremony of Phase 1 of the Abuja Rail Mass Transit Project (ARMTP) cost US$823,540,545.87 (about N251,179,866,490 at an exchange rate of N305 to the dollar). It was funded 60% by the China – Exim Bank and 40% by the Federal Capital Territory Administration (FCTA).
Phase One covers a portion of Lot 1, and Lot 3 which starts at Idu Industrial Zone via Gwagwa-Deidei and terminates at Gbazango Station in Kubwa (18km).
Lot 3 runs from Abuja Metro Station via Idu Industrial Zone and terminates at the Nnamdi Azikwe International Airport (27.3km).

Both Lots, according to Bello, connect at the Idu Station to enable easy passenger transfer with the National Rail line linking Kadduna and Abuja. 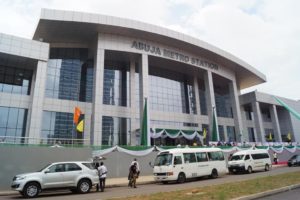 He adds: “Scope of work include 45.3km of double standard gauge rail tracks, a maintenance deport, training school, operations control centre and 12 Stations:-
Abuja Metro Station, Stadium Station, Kukwaba I (National Park Station), Kukwaba II (Ring Road Station), Wupa Station, Idu Station, Bassanjiwa Station, Airport Station, Gwagwa Station, Deidei Station, Kagini Station and Gbazango Station”.
He stated further that the Abuja Rail Mass Transit System is an integral part of the Federal Capital Territory (FCT) Transportation Master Plan designed primarily to transport large number of commuters and goods between Satellite Towns into the Metropolitan Public Transport system and the different Phases of the Federal Capital City (FCC).
The Abuja rail system, planned to integrate with the National Rail Network when eventually completed., he disclosed,
is packaged into six lots planned for phased development, based on preferential demand and available financial resources.
The six lots, with a total length of 290 kilometers, are:
●Lot 1: From Nnamdi Azikwe Expressway through the Transportation Centre (Metro Station) via Gwagwa to Kubwa;
●Lot 2: From Gwagwa via Transportation Centre (Metro Station) to Nyanya/Karu;
●Lot 3: From Transportation Centre via Idu Industrial Zone to Nanmadi Azikwe International Airport;
●Lot 4: From Kuje Satellite town to Karshi Satellite town with the remaining legs of the Transit way line 2;
●Lot 5: From Kubwa via Bwari to Suleja; and
●Lot 6: From Airport via Kuje and Gwagwalada to Dobi
He announced that the Federal Capital Territory Administration (FCTA) has also taken delivery of the three coaches meant for initial operations while awaiting the arrival of the rolling stock of 48 coaches.
“To this effect, the FCTA has concluded an infrastructure soft loan agreement with Exim Bank of China for the supply of the remaining coaches, including their maintenance for three years at a cost of US$194,008,602.43 (about N59.17 billion)
“The Bank would fund the project to the tune of US$157,001,049.89 (about N47.885)(85%), while the FCTA would bring in a counterpart fund of US$37,007,552.54 (about N11.28billion)(15%)”.
Bello revealed that the rail tracks, signalling, stations and other infrastructure were completed in December, 2017. 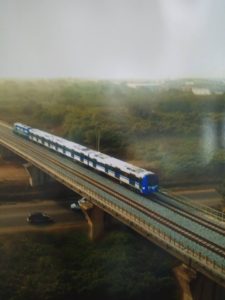 “In line with International best practices, we spent two months testing the rail system without passengers, one month with passengers…the Federal Ministry of Transportation after working closely with our team of Engineers, the Construction Company China Civil Engineering Construction Corporation (CCECC) and the project Consultants, Messrs Transurb Technirail Ltd has granted the Abuja Rail Mass Transit Project (ARMT) (Lot 3 & Lot 1A) Safety Certificate for Commercial Operations,” he added.
Meanwhile, the FCTA is working on Phase II of the Abuja Rail Mass Transit Project to cover a distance of 32.54km from Nnamdi Azikwe Expressway at Garki Area One via the Transportation Centre to Gwagwa and from Bazango Station to Kubwa.
The Minister said further, “The Federal Executive Council approved the project in 2017 for construction by CCECC at a cost of US$1.3billion. 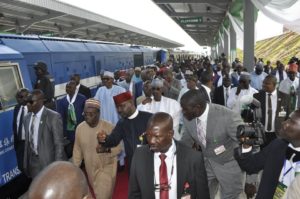 “We hope that the Minister of Finance would consider putting this key project in the next borrowing plans, the Minister of Budget and National Planning would agree to it, the National Assembly would approve it and that China – Exim Bank would fund it as a mark of goodwill for the cordial relationship between our two countries”.