Copyright 2021 - All Right Reserved
Home Business Why FAAC was deadlocked and why salaries will be delayed, by Finance Minister
Business

Why FAAC was deadlocked and why salaries will be delayed, by Finance Minister

Like always, the meeting of the Federal Accounts and Allocation Committee (FAAC) was deadlocked Wednesday over money due to it from the country’s golden egg, the Nigerian National Petroleum Corporation (NNPC).
But the balances in some special federation accounts are juicy. The Excess CrudeAccount is $1,916,742,289.60;  Stabilisation Account, N18,892,864,216.65, and Natural Resources Account is N133,715,427,387.37.
Finance Minister, Mrs. Kemi Adeosun, made the disclosures this Thursday, and explained the source of the disagreement that deadlocked the FAAC meeting, which she disclosed will likely lead to delays in paying the salaries of government staff, especially at the state and local government levels.
Her explanation is coming as NNPC told its side of the story.
Adeosun’s explanation to jouralists in Abuja: “I gave an account that I give every month on the balances in our Excess Crude Proceeds Account and the Stabilization Account. Items to note in the Excess Crude Account is that in May 2018, we had an additional credit of $80.6 million that accrued into the excess crude account. 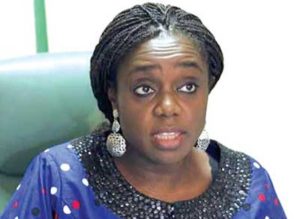 “Also in my capacity as the Chairman of the Federation Account Allocation Committee (FAAC), I briefed the Governors on the deadlock that we have got currently in the Federation Account and explained what happened.
“For the purpose of this briefing, we operate NNPC as a business. We have invested public capital in that business and we have expectations of return and when that return falls lower than our expectations then the owners of the business, which in this case is the Federal Government and States, need to act.
“So, that was what caused the deadlock yesterday (Wednesday) and we really felt the figures that the NNPC proposed for FAAC were unacceptable. We felt that some of the costs couldn’t be justified and so we have decided that rather than approve the accounts, we will go back and do further work.
“So further negotiations and interactions are going on with the NNPC as we speak. However, we did briefed both Mr. President and Mr. Vice President on the deadlock and asked for their support and their forbearance in this because of the consequence which is that workers’ salaries might well be delayed in many States as a result of this. In order to get the accurate figures,that we need, we have asked for forbearance and the State Governors and the Federal Government are all in agreement that we need to get to the bottom of these figures.
“In particular, now that the oil price is now $76 per barrel in the spot market, which means that Bonny Light is about $78. We want to aggressively set aside money in the excess crude account.
“So, we are very, very conscious that this period, this window of relatively high oil price might not last and we would like to be able to save. If we cannot get into the Federation Account the sort of revenues we are expecting then we will not be able to save.
“So, it was a very important point really underscored by all the Governors and they really want action taken and they are fully in support of the positions of the Federal Ministry of Finance and the Commissioners of Finance not to approve the accounts until we get further explanations on some of the cost being implemented.
“On what’s the issue with the NNPC, based on oil price, oil quantity you can pretty much calculate what you are expecting to see in the Federation Account and if the figure is less, then the right question that any stakeholder must ask is why?
“So, we have been going back and forth with NNPC to try and understand these figures before we can accept them. Remember that the FAAC figures have to be formally accepted by the Federation Account Allocation Committee and we were simply not comfortable with the quantum of some of the deductions made and therefore we could not approve those figures.
“As we speak, there is an interface going on between the Commissioners of Finance Forum, Federal Ministry of Finance, Office of the Accountant General, Central Bank of Nigeria, and the NNPC. We hope to be able to convene FAAC within next few days”.

Meanwhile, NNPC is saying that the N147 billion June remittance to FAAC,  was in line with the terms of agreement it had with governors on the matter.

In a statement, the corporation said the agreement it had with the governors was that the corporation would make a monthly remittance of N112 billion to FAAC subject to sufficient funds from sales of domestic crude oil allocation for the corresponding month.

It added that the remittance should be made after meeting cash call obligations on JVs, deductions of Premium Motor Spirit (PMS)-cost under recovery and pipeline maintenance.

“NNPC was able to surpass the terms of agreement with the governors on the monthly remittance for the month of June by N35 billion, having taken a cue from their postures by taking from the sum meant for settling cash call obligations.

“The corporation regretted the Governors’ additional request of N40billion, saying it was unfortunate, given the fact that NNPC is set to exit the cash call phenomenon,” It said.