From Ron-Well Jacob, Jos.
Six days after the killings of over 200 people in Barkin Ladi, Riyom and Jos South Local Governments of Plateau, no relief materials hvave arrived for the victims.
Investisgations by everyday.ng showed that since the last Sunday when the killings took place, neither SEMA nor NEMA has provided any relief materials to the affected victims.
But not so for the Barkin Ladi Local Government, which Chairman says has given N100,000 each to the Internally Displaced Persons (IDPs) camps it knows.
The Taraba Governor, Senator Dariye Ishaku, however, made an unannounced cash donation to victims when he visited. 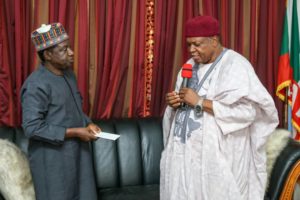 Most of the victims, who are taking refuge in churches and schools as well as houses of some of their relatives, are complaining of inactivity of relevant authorities to provide for their needs in the terrible situation they are living.
Many were appalled that the federal government announced a N2 billion donation to victims of the Katsina storm when the President visited on Friday, when no such announcement was made by the various delegations – federal and state – that visited Jos.
It is estimated that there are 325,000 IDPs in Barkin Ladi and its environs.
Some of the IDP Camps include COCIN Church Heipang, COCIN Gangare, St. Jones Seminar, COCIN Bang in Heipang, RCC Fan, Yarwi in Fan and COCIN Anguldi.
“Most of our People are taking refuge in churches and schools with nobody coming around with any relief material for us in this difficult cold and raining season,’’ said Dachom Davou, one of the IDPs at Yarwi  in Fan.
Davou said, “the most serious issue is how to feed in this place and not even how to sleep in this cold and raining season.’’
Mrs Sarah Joel, accused the government for neglecting them at their time of need, saying, “we have lost our husbands and wives and children, our houses and other belongings to the attack, yet nobody cares what is happening to us here.’’
She called on the federal and state governments to do something drastic to assist them not to fall ill in the cold and raining season and lose their lives.
Mr Gyang Zi, a legal Practitioner and native of Berom, expressed deep concern for the difficult situation the IDPs were living in at the various IDP camps across the state.
He condemned the slowness of the authorities at providing succuor to the affected victims who have lost their loved ones and properties especially their house already burnt down by the attackers.
“Necessity calls for prompt action from the authorities to assist the victims with relief materials; but one to know that six days after the attack, no relief material has arrived for them, ’’ he said.
But the Chairman of Barkin Ladi, Mr Dickson Chollom, debunkd the claim that no relief materials have been given to the victims.
The chairman claimed that his council moved to all the IDPs camps and donated N100, 000  to the leadership of the churches for provision of foods and other things needed as assistance.
“We are expecting SEMA and NEMA come with their relief materials today. SEMA has assured us that their relief materials are arriving today, Saturday.
“The situation has overwhelmed us but with the help of God, we are trying our best to assist the victims and make sure they are well kept in the camps they are staying, ’’ Chollom said.
Meantime, Governor Dairus Dickson Ishaku of Taraba State has condemned the last Saturday killings of innocent people in Gashish District of Barkin Ladi Local Government Area and its aftermath.
The Governor stated this when he led a high-powered delegation from his State to commiserate with Governor Simon Bako Lalong, the government, and people of Plateau State over the recent disturbances in some parts of the State.
He said Plateau and Taraba are not only neighbours but brothers and that whatever affects one affects the other. He noted that the country is going through difficult times and prayed God’s intervention in the affairs of man.
The Governor later presented an undisclosed amount of money to Gov.Lalong in aid of victims of the attacks.
Responding Governor Lalong thanked the government and people of Taraba State for the solidarity visit and also prayed God to heal the land.