By Ron-well Jacob, Jos.
Vice President Yemi Osinbajo has arrived Jos, the troubled Plateau State capital on his way to Barkin Ladi Local Government Area (LGA), where about 200 lives were lost following attacks by Fulani herders.
Osinbajo was received by Governor Simon Lalong at the Jos Airport as anger continues over comments by Miyetti Allah justifying the killing of 200 persons, including women and children, over the slaughtering of 300 cows. 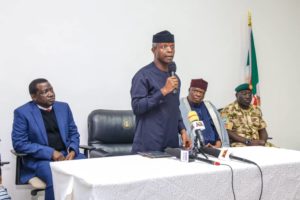 Meanwhile, the authorities of Plateau State University (PLASU), Bokkos on Monday announced a shift in the institution’s first semester examinations to July 2.
A statement smby the unversity’s Registrar, Mr Amos Mallo and issued said that the Vice Chancellor, Prof Yohana Izam, on behalf of the Senate approved the shifting of the first semester exams scheduled to commenced Monday, June
Almost 200 persons were killed at the weekend by fierce looking herdsmen, who swooped on villages in Gashe District in Barkin Ladi and part of Riyom and Jos South Local Government.
PLASU quickly announced a shift of the semester exams to avoid its students and staff being affected by the crisis.
The Unversity’s registrar advised the students to continue with their revisions following the shift.
“In view of he curfew imposed on the three LGAs by the state government, all staff and students  are hereby advised to be circumspect in their movements, ’’ the registrar admonished.
Mallo however called on security operatives to help keep vigil over the university campus and its environs to avoid any eventuality.
A Peoples Democratic Party (PDP) member in the State, Chief Alexander Mwolwus, Plateau PDP Chieftain has called on the federal government to arrest officials of Maiyetti-Allah Cattle Breeders Association of Nigeria (MACBAN) for claiming responsibility for the killings in Plateau.
But Mwolwus in an Interview with the everyday.ng on Monday described the group’s claim as the “height of madness’’ and “very callous’’ which deserved urgent action by government.
“The Federal Government must order the arrest of officials of Maiyetti-Allah to face prosecution for such an impujity, madness and callousness.
“This madness and callousness should nof be treated with levity anymore but with the seriousness it so derserved to save the lives of innocent Nigerians who are being traded for animals, ’’ the Politician said.
Mwolwus, a former Special Adviser (SA) to Ex-Governor Jonah Jang on Polical Matters added, “Government must not allow this `mad game’ to continue nor continue treating them with kid gloves.’’
According to him, “the struggle against deliberate attempt to take away our land, is a struggle that plateau people will keep fighting no matter what it takes.’’
He called on Governor Simon Lalang to rise to the challenge of ensuring that the lives  and property of Plateau indigenes were well protected from the so-called marauders.
On the statement credited to the Chairman on MACBAN in the North Central zone, Danladi Corona, the Barkin-Ladi Branch Secretary, Alhaji Abubakar Gambo, denied knowledge of such statement and described it as the workings of enemies of the Fulanis.
“I can tell you that we that are the herdsmen affected in the crisis in these three local government that government imposed curfew on, we have no knowledge of such a statement nor carried any such wicked act against the natives.
“IIf any such statement truly exists, then it’s an attempt trying to paint us in bad light, which I believe will fail because we don’t know those who carried the attacks, ’’ Gambo said.