Twenty-two days to the National Convention of his party, the National Chairman of the All Progressives Congress (APC), Chief John Odigie Oyegun, has opted out of the race to retain his coveted seat, leaving the race open for the next most prominent contender, former Governor Adams Oshiomhole of Edo State.
He told journalists at his residence in Abuja: “Even though, I had the desire to re-contest as National Chairman of the Party, I have decided that it is ultimately in the best interest of the Party for me to withdraw from the race”
Following the crises that has rocked the ruling party, Oyegun has remained out of public view, amid allegations that he and some others were orchestrating the crises in States of governors that were opposed to his return.
In a statement he read to journalists on Friday, Oyegun explained his decision to let go his ambition. The statement is reproduced below: 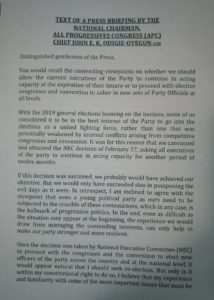 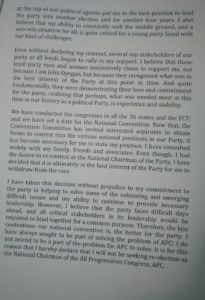 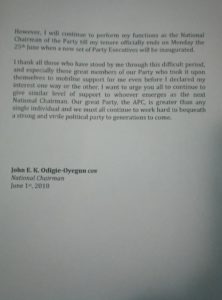 My affair with Kogi Governor over Ajaokuta, by Natasha Akpoti