An explosion from a petrol tanker which fell and spilled its content on the Lagos-Ibadan expressway Thursday evening, has left many dead, with tens of cars burnt. A dark plume of smoke filled the air.
First responders had a hectic day controlling a crowd that gathered and was more interested in taking shots and filming for social media posts. 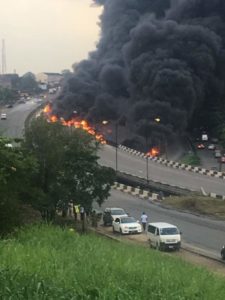 Plume of smoke from the exploded petrol tanker.

A second, but milder, explosion threw ash in the air and forced spectators back for emergency workers to do their work.
The accident and the attendant fire occured at Otedola Estate junction of the Lagos Ibadan expressway, leaving charred human bodies and cars.
Many wept at the scene while others took shots.

Why FAAC was deadlocked and why salaries will be delayed, by Finance Minister