The Minister of Information and Culture, Alhaji Lai Mohammed, has challenged the Peoples Democratic Party (PDP) to present its scorecard of achievements, especially in the area of infrastructural development, in the South-East and the South-South in its 16 years in office.
The Minister, who threw the challenge while inspecting ongoing construction of the Enugu Port Harcourt Expressway on Thursday, said it’s disheartening that some politicians have made it their pastime to criticize the current administration for allegedly neglecting the two regions without any verifiable proof. 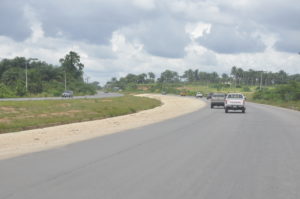 A completed section of the ongoing Enugu-Port Harcourt Expressway project during the inspection by the Minister of Information and Culture, Alhaji Lai Mohammed, on Thursday.

“I’m particularly glad that we came on this trip for two reasons. I think it has given the lie to those naysayers, who have painted the administration as having done nothing for the South-East and the South-South.
“When we were coming on this (third) stretch of the road, I was informed that until this administration came, an entire lane was completely impassable after it was turned to a refuse dump. Now the question is: In 16 years, what did the PDP do on the Enugu-Port Harcourt Road?
”Everything that we saw (along the Enugu-Port Harcourt road) today is what this administration has achieved, yet some politicians are so fraudulent. They sit in Abuja and accuse the administration of doing nothing for the South-East and the South-South,” he said.
Alhaji Mohammed said the intervention of the present administration in the provision of infrastructure in the South-East, in particular, has exposed the PDP for deceiving the people of the region for the 16 years it was in power without anything to show.
”From what you have seen yesterday and today, you will see that this administration has done so much for this zone. We can now see that some people are just misinforming the public. I am glad that from the feedback we are getting, the people in the South-East know what is going on because they know what was going on for 16 years and are also here in the last three years and they have seen the difference,” he said.
The Minister gave the assurance that the federal government will remain focused on completing inherited projects across the country.
“The most important thing is that this government has been faithful, sincere, passionate and committed towards infrastructural development. What we are doing has never been done in almost 16 to 20 years at least along this axis,” he said.
The Minister, who is currently on a nationwide media tour of federal government infrastructural projects, had earlier inspected ongoing work at the Second Niger Bridge, where he expressed satisfaction with the pace of work.