By Air Vice Marshal Olatokunbo Adesanya, Director of Public Relations and Information, Nigerian Air Force.
The Nigerian Air Force (NAF) has recorded new breakthroughs in its Research and Development (R&D) efforts, leading to further enhancement of its aircraft maintenance capability.
This became apparent when the Chief of the Air Staff (CAS), Air Marshal Sadique Abubakar, in company of the Chairman House Committee on Air Force, Honourable Samson Okwu, visited various NAF units in Makurdi on 23 June 2018.
The R&D feats include the reactivation of the Communications Control Unit (CCU) of the trainer version of the F-7Ni fighter aircraft. 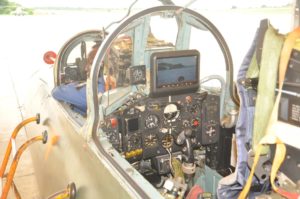 The CCU, which enables instructor pilots and trainees to communicate with each other and the control tower while on training missions, had resulted in the grounding of the aircraft thereby hindering training of fighter pilots.
Ordinarily, the CCU costs about forty thousand dollars (about 15 Million Naira) and would require a minimum of 10 months for delivery to the NAF.
However, through the ingenuity and resourcefulness of NAF engineers and technicians at the recently established NAF Central Avionics Overhaul Calibration Centre (CAOCC), the faulty CCU was repaired locally in a record time of just one week.
The Commander NAF CAOCC, Group Captain Osichinaka Ubadike, while briefing Honourable Okwu, the CAS and senior officers, stated that the Centre was able to repair 3 units of CCU at the cost of three hundred thousand naira.
A similar feat was recorded by the Engineering Wing of 101 Air Defence Group (ADG), where the old, unserviceable Cathode Ray Tube (CRT) Rear Cockpit Head-Up-Display (HUD) of the F-7Ni aircraft was replaced with a modern Liquid Crystal Display (LCD) HUD at a cost of One Hundred Thousand Naira, as against about Two Hundred Thousand Dollars (about 80 Million Naira) that would have been required to procure the same unit from abroad.
Group Captain Precious Amadi, Commander of 101 ADG, accompanied by one of his officers, subsequently conducted a test flight and performed some aerobatics with the FT-7Ni aircraft to demonstrate the efficacy of the repairs/modification on the two aircraft systems. 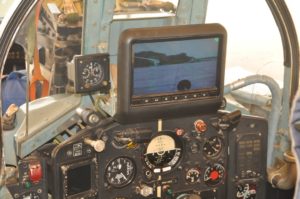 At the 131 Engineering Group (Engr Gp), the Commander, Air Commodore Pius Oahimire, revealed that the Unit’s recently reactivated Machine Tools Workshop had helped to modify the Battery Cart for the F-7Ni fighter aircraft.
Hitherto, the cart always broke down after about a year of use thus requiring significant lead time to replace the batteries from overseas vendors.
However, the Unit was able to modify the cart by fabricating accessories that would enable the use of local and readily available batteries, thereby reducing cost and downtime. 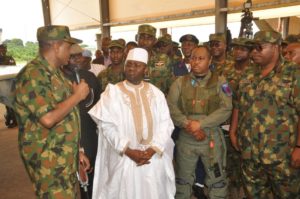 The 131 Engr Gp had also designed and constructed a Foreign Objects Debris (FOD) Picker that would help to clear all ferrous FODs from the apron for enhanced safety.
While in Makurdi, the Guest of Honour, Honourable Okwu, seized the opportunity to commission two recently completed projects. The first was a newly constructed and furnished block of 10 x single room flats for single officers, which was named after the immediate past Chief of Training and Operations (CTOPs) at NAF Headquarters, retired AVM Ahmed Iya, who was also present at the event.
The second project was the newly constructed and equipped Cancer Screening Centre at 161 NAF Hospital. The Centre, which was named after a deceased former Director of Medical Services (DMS), late Air Commodore Emmanuel Nkanor, is equipped with modern diagnostic equipment and support infrastructure.
In his remarks during the commissioning, Honourable Okwu stated that the two projects were testimonies of the sensitivity and responsiveness of the NAF’s leadership to the welfare needs of its personnel.
He urged the benefitting officers of the SOQ to ensure they maintained the accommodation and charged them to rededicate themselves to accomplishing assigned tasks.
He said he was excited that the services provided by the Cancer Screening Centre would not only impact positively on the health of NAF personnel but would also be accessed by the citizens of Benue State. He also expressed great satisfaction with the level of results achieved by the NAF in R&D.
Earlier, the CAS had commended the Air Officer Commanding Tactical Air Command (AOC TAC) and the various Commanders for the R&D feats, which he noted had further enhanced NAF’s aircraft maintenance capability.
He stated that these were evidences that the Nation had the necessary capacity to provide innovative solutions to most of its challenges, if we all are, individually and collectively, committed and motivated.
Air Marshal Abubakar further stated that his desire was to enhance professionalism by meeting the welfare needs of NAF personnel, being cognizant that the human being was the most critical element in any working system.
He disclosed that Cancer Screening Centres were being established in NAF Hospitals across the country to provide effective and affordable avenues for early diagnosis, screening, treatment and palliative care to reduce the scourge of the disease.
He stated that two more Centres would soon be established at the NAF Hospitals in Benin and Port Harcourt. The CAS restated his commitment to ensuring that Benue State, and the country at large, is liberated of all forms of criminality, which adversely affect our economic, social and cultural wellbeing.
In his welcome address, the AOC TAC, AVM Oladayo Amao, thanked the CAS for always attending to the needs of the Command and consistently taking action to address areas of infrastructural deficit in NAF Base Makurdi.
The Air Commodore Nkanor Centre is the fourth of such Centres that had been established by the NAF in the past 3 years, the others being located at Abuja, Maiduguri and Bauchi.