…Seeks establishment of schools in IDP camps
Speaker of the House of Representatives, Hon Yakubu Dogara, has called for the integration of internally displaced persons into neigbouring communities because structures to return to them home are not yet in place.
He noted that though it would be appropriate to return IDPs to their communities, they could not be left on their own because the war on terrorism has not been totally won. He fears ignoring them makes them vulnerable to entreaties insurgents.
Speaking when he paid a visit to Karmajiji IDPs’ camp in Abuja, where he flagged off medical outreach for over 2000 people in the camp, Hon Dogara flayed government agencies for failing to play their roles in providing succour for the internally displaced persons and leaving them at the mercy of faith-based and non-governmental organisations.
He said, ‘It is turning out to be a long stay, I don’t know how we will approach this, whether this act of intervention on the part of the NGOs and faith-based organisations will be enough, or whether government should look for other means by which we can integrate the IDPs themselves, as against rushing them back to their communities where they could be displaced again. So that is the task that we all must set our minds to accomplish. We need to integrate them if we cannot send them back to their communities in the nearest possible time. That effort must be made by government, not even NGOs, NGOs can support and faith-based organisations can also support, but the government must stand up and be counted.
“I’ve heard the desire expressed by the director of the camp, that you would love to return back home. Of course, that should be the goal of government as well, that wherever IDPs are, Nigerian citizens, in the F.C.T, in the South, Cameroon, Niger, Chad, that we quickly get them back home. But the truth is that it would be very difficult to do that before the war on terrorism is won. Only few days ago someone told me that some of the IDPs that returned to Bama were being forced out, or displaced again. For some of them, this may be the second or third displacement.
“If that were to be the case; it would be very unfortunate, for any of our brothers or sisters to be subjected to this row of bloodletting that would force them out of their communities. So the responsibilities on the shoulders of government is to first of all make sure that the war is won, and our brothers and sisters can return home in dignity and honour and with the kind of peace that we desire for them. But right now it is unfortunate that we have to manage; the way we are managing.”
The Speaker expressed dismay at the appalling condition in which IDPs live in the camps even when they are in the FCT, saying that should not be the case in Nigeria. 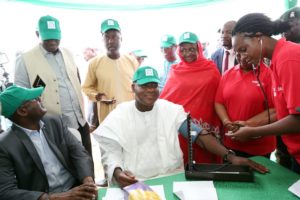 He added government has to live up to its responsibilities to provide social services to brothers and sisters who are direly in need of them, especially victims of the on-going war on terrorism.
“It is a big surprise to me that here we do not have representatives of security agencies and other critical stakeholders like N.E.M.A, the Refugees Commission, and so on, and so forth. Its these stakeholders that should normally take the responsibility of providing succour to our brothers and sisters: the IDPs. It is really unfortunate that they are not here, because this would have been an ample opportunity to see firsthand the very pitiable condition under which the IDPs are living, and through that, formulate a channel of responses that will take care of their immediate needs,” the Speaker said.
He assured the IDPs that he will work with the House Committee on IDPs of the House of Representatives to ensure that something is done to supply food items to them very soon and will work with the authorities in the F.C.T to ensure that kids in that particular camp are enrolled in school.
“Education is a tool for social changes, there is no better tool than education and when you exclude them from education; it is like looking for further trouble in the future. So we have to look for any means possible to ensure that additional classrooms are provided so that they may take advantage of the offerings as IDPs. If there is no school; then one has to be created as needed. Unfortunately that they have lived here for above three to four years as they said, and we have not been able to provide them with education, that opportunity should be extended to them. We also have to do everything possible to ensure that it is done in the immediate,” Dogara added.
Hon Dogara thanked members of the visiting group for deciding that the best way to reach out to the IDPs is by extending the love of God according to His commandment that they take care of the fatherless, the motherless, widows and so on, and so forth.
“That is the big Commission that is given to the Church. And because you have risen up to do this; God in His infinite mercies will ensure that the covenant that He has entered into with us that if you do B or assist C; you will definitely reap the reward. And I will urge that you don’t rest on your oars, that as you have extended to this IDP camp, they are other IDP camps too, don’t be tired. I know that it is a difficult task, but the only way that people can see the love of God is when we take care of their needs. I’m sure that they will also appreciate the fact that God is using their own to bless them. Since the days of Manna are far gone; Manna will not fall from heaven and angels will not come to minister to them, we are therefore the angels, and I thank God that you are living up to that responsibility, and God will bless you and increase you mightily,” he prayed.