Apparent eager to clear his name that has been badly sullied, the President of the Senate, Dr. Bukola Saraki, has sent his police Aide de Camp (ADC) to pick up an invitation letter from the Police so he can tell his side of the story of his relationship with suspected Offa Banks armed robbers who claim to be his political thugs.
It has been speculated that an unverified agenda is in place to rubbish the Senate President to unseat him, and subsequently try and jail him.
But five of the Offa Robbery gang leaders maintain they have worked for Saraki and Kwara State Governor, AbdulFatah Ahmed, as political thugs over the years, though they exonerated both men of involvement in the Offa Robbery that claimed over 33 lives.
In a tweet, Saraki disclosed that he has sent his ADV to pick an invitation 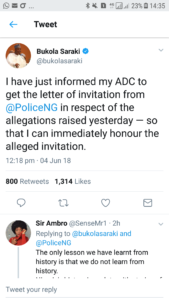