A group of Senators and House of Representatives, under the Parliamentary Support Group for President Buhari, have distanced themselves from the resolution of the Joint closed session of the National Assembly which more or less read a riot to the Executive arm of government.
In a series of tweets from his Twitter handle, recently reinstated member of the House, Abdulmumini Jibrin, said the resolutions from the Joint session were the personal opinion of mainly Peoples Democratic Party (PDP) members.
Jibrin was sent on suspension by the House of Representatives for over a year for accusing the National Assembly of padding the 2017 Budget. A court ruled this year that the suspension was illegal after he was recalled.
He alluded to his suspension and advised the leadership of the federal legislature to remove the log from its own eyes before calling on the Executive to do so.
It is not exactly known how many lawmakers Jibrin speaks for, but insiders say they are “considerable”, though a number could not be thrown up.
“They include those Senators that opposed the re-ordering of elections including the former Governor of Nasarawa State, Abdullahi Adamu. There are others who do not trust the President, but it is expedient to play along for now,” a source said.
The thread of Jibrin tweets on his handle, @AbdulAbmJ, are reproduced below 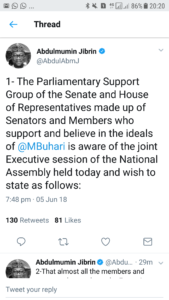 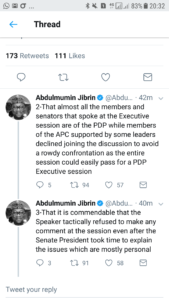 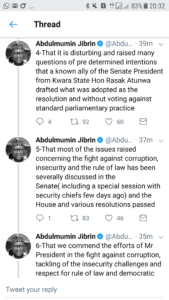 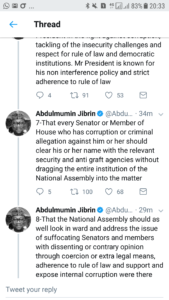 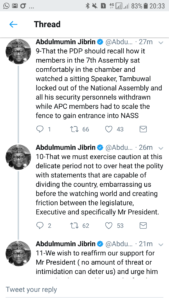 Recall that on Tuesday that the National Assembly, sitting jointly in an closed session, resolved to hold President Muhammadu Buhari accountable for the actions of his appointees, adding that he must be ready to sanction those that carry out any act which will ridicule or endanger the country and her democracy.
The members also passed a vote of no confidence on the Inspector-General of Police, Ibrahim Idris; and declared they would not hesitate to invoke their Constitutional powers if nothing is done to address the 12-point position it raised Tuesday.