25 years after the annulment of what was adjudged the freest and fairest election in Nigeria’s history, and 20 years after the death of the symbol of that election, Chief MKO Abiola, the presumed winner, has been posthumously given the highest honour in the land by the government, the Grand Commander of the Federal Republic (GCFR).
June 12, the date the election was annulled by former military President Ibrahim Babangida has also been christened Nigeria’s Democracy Day, President Buhari has announced in Abuja, Wednesday evening.
“Dear Nigerians, I am delighted to announce that, after due consultations, the Federal Government has decided that henceforth, June 12 will be celebrated as Democracy Day.
“We have also decided to award posthumously the highest Honour in the land, GCFR, to the late Chief MKO Abiola,” he said.
The sudden announcement coming shortly after the President eulogised late Head of State, General Sani Abacha, the man who kept Abiola incarcerated for years, though he died under General Abdulsalami Abubakar, is seen as a masterstroke to spite Babangida who annulled the popular election; and former President Olusegun Obasanjo who sat as Nigeria’s leader for eight years but refused to honour his kinsman.
Obasanjo and Babangida are ardent opponents to Buhari’s 2019 dreams. 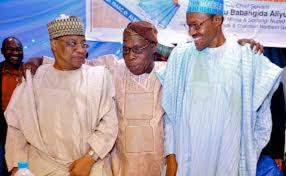 Babangida, Obasanjo, and Buhari when the going was good.

The move is also seen as parts of efforts to build a parallel political base for the President in the South-West as machinations begin for the 2019 elections. The base is expected to counter that of the All Progressives Congress (APC) National leader, Asiwaju Ahmed Tinubu, should he not be cooperative.
Buhari also posthumously honoured late prominent lawyer, Chief Gani Fawehinmi SAN, with the second highest honour of Grand Commander of Nigeria (GCON). Abiola’s running mate and one of Buhari’s political strategist, Ambassador Baba Gana Kingibe, also got the GCON award.
On why June 12 was chosen to replace May 29 as Democracy Day, Buhari said on his Twitter handle:
“Dear Nigerians, I am delighted to announce that, after due consultations, the Federal Government has decided that henceforth, June 12 will be celebrated as Democracy Day.
“June 12, 1993 was the day millions of Nigerians expressed their Democratic will in the freest, fairest & most peaceful elections since our Independence.
“That the outcome of that election was not upheld by the then military Govt does not detract from its democratic credentials.
“We have also decided to award posthumously the highest Honour in the land, GCFR, to the late Chief MKO Abiola.
“Chief Abiola’s running mate, Ambassador Baba Gana Kingibe, is also to be awarded a GCON. Furthermore, the late Chief Gani Fawehinmi, SAN, tireless fighter for human rights & democracy, & for the actualization of the June 12, 1993 elections,will be posthumously awarded a GCON.
“In the view of Nigerians, as shared by this Administration, June 12, 1993, was and is far more symbolic of Democracy in the Nigerian context than May 29, or even October 1″.

Group to Saraki and Dogara: “You cannot muster the number to impeach Buhari”