Following the arrest of Abia South Senatorial District representative, Senator Eyinnaya Abaribe, by operatives of the Department of State Services (DSS) on Friday, and the alleged search carried out in his residence, the President-General of the Ohaneze Ndigbo, Chief John Nnia Nwodo, has called for his immediate release.
He said in a statement that it was wrong for the security agency to have arrested the lawmaker on account of his inability to produce the leader of the Independent People of Biafra (IPOB), Nnamdi Kanu, whose whereabout is not exactly known. 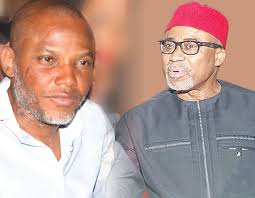 Abaribe was picked up at a popular hotel in the Maitama District of Abuja. The lawmaker stood as surety for Kanu in court.
The Senator’s political party, the Peoples Democratic Party (PDP) had called on the DSS to disclose where he is being kept.
Mr. Kola Ologbondinyan, the PDP spokesman said the clampdown on the senator is feared to be in furtherance of the moves to “intimidate and emasculate” outspoken and critical members of the National Assembly.
Abaribe was the senator who described President Muhammadu Buhari as incompetent in the handling of the issue of rampaging killer Fulani herdsmen.
On a visit to London, Buhari had blamed escaping fighters from Libya for the crisis between herdsmen and farmers in parts of the country, a position Abaribe faulted on the floor of the Senate because it contradicted what security chiefs told senators.
But the opposition party stated Friday: “The PDP notes that the Federal Government has given no reasons for the arrest and detention of Senator Abaribe, who has been kept incommunicado without access to his lawyers and associates.
“The party also notes the apprehension of Nigerians following numerous alleged plots by the Federal Government to frame up other lawmakers, including Senate President Bukola Saraki, Deputy Senate President, Senator Ike Ekweremmadu, as well as Senators Dino Melaye and Shehu Sani.
“Nigerians can now see that our dear nation is fast descending into a fascist state where constitutionally guaranteed freedom of speech no longer obtains and citizens are marked, arrested and detained on the whims and caprices of those in power.”
“The laws of our nation are clear on the process of arrest and prosecution of any citizen and not recourse to clampdown and intimidation.”
In his statement, Nwodo said: “The circumstances prevailing at the time of the disappearance of Nnamdi Kanu are beyond the contemplation of the law that a surety can guarantee the production of an accused person.
“The army in the name of “Operation Python Dance” invaded Nnamdi’s home and destabilized normalcy there.
“It is only the security agency that can disclose Nnamdi’s whereabout.
Senator Abaribe has no capacity, nor has any surety in the circumstances to know the whereabouts of Nnamdi Kanu.
What happened in Umahia was an invasion, a war of a kind.
“Nnamdi may have been killed or captured in the imbroglio or even escaped into hiding.
“The onus lies on the security forces to disclose his whereabout.
“The judiciary is beginning to tow the line of the executive by throwing the law overboard in matters that affect the South East.
“We are all equal before the law. Senator Abaribe must be released forthwith.”