The political sagacity of Ekiti Governor, Ayo Fayose, will definitely be put to the test as the All Progressives Congress (APC) on Thursday set up a colourful 77-member National Campaign Council to ensure victory for the Party’s governorship candidate, Dr. Kayode Fayemi, at the July 14 Ekiti Governorship Election.
The campaign council headed by the Governor of Kebbi State, Abubakar Atiku Bagudu, was inaugurated by the APC Deputy National Chairman (North), Senator Lawali Shuaibu, on behalf of the National Chairman, Chief John Odigie-Oyegun. It consists of fourteen serving governors, ministers, some members of the Party’s National Working Committee, National Assembly members and senior Party leaders. 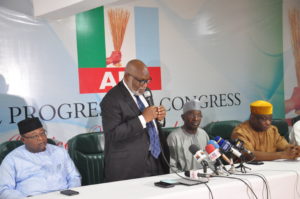 Speaking during the inauguration, Lawali Shuaibu stressed the importance of the Ekiti governorship election to the Party,  and urged the campaign council to shun hate speech in its campaign message to the people of Ekiti.
Shuaibu: “In the exercise your assignment, please avoid hate speech. Let us ensure that we don’t use hate speech during our campaigns. If other Parties do that, our concern should be to capture the hearts of the Ekiti people in going out to bring to an end the four-year comedy that has been going on there.
“The election in Ekiti is very important for the APC. Infact, we feel the level of importance of the election is slightly below the importance of the presidential election to us. We are not going to relent in our effort to win Ekiti State. The responsibility now rest on your shoulders.”
The National Organising Secretary, Senator Osita Izunaso, during the inauguration also expressed the Party’s resolve to win the Ekiti governorship election. “The election should be a must win for our Party. We won that election before, it was taken away fraudulently. This time around, we want to win it again and retain it.” He said.
The Chairman of the Party’s National Campaign Council and the Governor of Kebbi State, represented by the Ondo State Governor, Arakunrin Oluwarotimi Akeredolu SAN, at the inauguration called for unity among the campaign council and all stakeholder to ensure victory, come July.
He said: “We take this task as very important. Just as we all have stressed it. This will not be the first time the Party is expressing and underscoring the importance of this election. When South-West Party leaders met with the president recently, he underscored the importance of this election.
“We have faced enough of affront as a Party. Challenge has been thrown to us not only by the PDP, but by Governor Fayose. So we must be united to confront that challenge. We will give our all to ensure that we win Ekiti State for the APC.
“This will be a second battle. Somebody I read on Facebook said something about Ekiti and I said by the Grace of God, it will happen that way. I tell you what he said, ‘Akeredolu contested against Mimiko, he lost. He contested thereafter against Mimiko’s candidate, he won. So if Fayemi contested against Fayose and lost, he is now contesting against Fayose’s candidate. He will win’”.
FULL LIST OF EKITI STATE CAMPAIGN COUNCIL