CAN mourns with Catholic Church as priests and others are buried

Additional reports by www.nan.ng.
The Christian Association of Nigeria (CAN) has commiserated with the Catholic Secretariat of Nigeria (CSN) over the mass burial for the two priests and parishioners killed by the Fulani herdsmen in Benue State recently.
In a statement from the office of CAN President, Dr. Samson Ayokunle, observed that it was a trying time for the church in Nigeria urging all Christians to identify with the Catholic Church in its nationwide peaceful protest against senseless killings in Nigeria.
Meantime, the Auxiliary Bishop of the Catholic Archdiocese of Abuja, Bishop Anselm Umoren, has called on the Federal Government to rise up to its responsibility to protect lives and property of citizens.
Umoren made the call on Tuesday in Abuja in his sermon at the Requiem Mass for the slain priests and lay faithful in Mbalon, Benue.
Two Catholic priests, Rev. Fathers Joseph Gor and Felix Tyolaha, and 17 worshippers were killed on Tuesday, April 24.
They were killed when suspected herdsmen invaded St. Ignatius Quasi Parish, Ukpor-Mbalom in Ayar-Mbalom community of Gwer East Local Government Area (LGA) during Morning Mass.
The bishop reminded the President Muhammadu Buhari of his inaugural speech in 2015 to protect the lives and property of all Nigerians irrespective of their religion and tribe.
“We are here today to remind our President about his promise to secure the lives and property of the citizens.
“Life is sacred; it is only God that has the right to take life, so there should be dignity for human life.
“Therefore, we call on the government to defend the citizens.
“We pray for the repentance of those killing innocent people that they may be converted because God wants them to repent from their evil deeds,’’ he said.
He, however, called on Christians to pray for peace and justice to reign in the country, adding that they should be people of clean hands and clear hearts.
Umoren also urged Christians not to allow the killings to affect their relationship with God and the country.
“We should fear God who owns our body and soul; we should not fear those that can kill our body only,’’ the bishop said.
Umoren said the martyrs of Benue would be remembered for their commitment to their God.
Also, the Primate of Church Nigeria Anglican Communion, Most Rev. Nicholas Okoh, reiterated the need for the government to protect the lives and property of citizens.
“The Army, Navy, Police and all the security agencies should be empowered to enter the bush and fish out these killers and deal with them.
“They are human beings, they have to prosecute them and bring them to face the law.
“If this is not done, this problem will not come to an end,’’ he said.
Okoh urged Christians not to be intimidated with the happenings but should remain steadfast in prayers.
He commended the Catholic Church for it contribution to peace and justice in the country and assured them of the support of the Anglican Communion.
There was massive turnout of Christians at the Christian Centre in solidarity with the Catholic Church in mourning of the slain two catholic priests and parishioners. 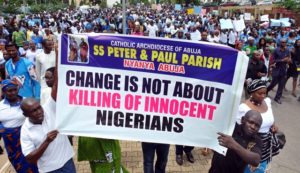 Catholic faithful during a peaceful prayerful procession to protest the killing of Catholic Priests and other Christians in Benue State, in Abuja. 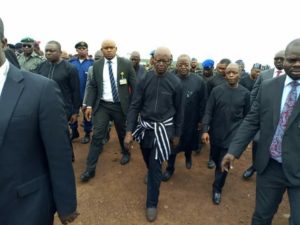 Osinbajo at the burial of the Catholic priests and parishioners.

CAN appealed to security agencies to rise up to the security challenges in the country, adding that security operatives have no excuse for the failure to stop the unending senseless killings in Nigeria.
CAN expressed dismay that the killing of innocent persons was becoming a global embarrassment, with mass burials being carried out too frequently for a country that was not at war.
CAN called on President Muhammadu Buhari not to forget his 2015 campaign promises to fight insecurity and keeping Nigeria united, noting that it was one of the reasons Nigerians overwhelmingly voted for him.
“Buhari’s administration should not fold its arms and watch misguided Nigerians, mostly Boko Haram and herdsmen promote killing as a pasttime in the name of politics and ethnics while solution appears very elusive.
“It is disheartening to note that criminal Fulani herdsmen, bandits, kidnappers and other hoodlums have reduced Nigeria to a Banana Republic.
“This development is unacceptable and we call on all well meaning people everywhere in the world to join hands in praying for the deliverance, freedom and liberty from this self inflicted bondage,” the statement added.
CAN noted that though it was not opposed to the President’s exercise of his right to seek re-election, it urged him to halt it for a while to attend to the security problems occasioned by the criminal activities of the terrorists, herdsmen and bandits.
It asked him to ensure the release of Leah Sharibu, the remaining Chibok girls and other abductees from the captivity of the Boko Haram terrorists.
CAN prayed for comfort to the bereaved, accelerated recovery to those who are recuperating from the wounds and multiple injuries sustained from terror attacks in the past years and few months.