There are indications in Abuja that Senator Dino Melaye has been released by Immigration authorities, which stopped him from leaving the country for Morroco this morning.
Details of his release are still being awaited though sources said his belongings were returned to him.
Phone calls to Senator Melaye lines were not picked, but a National Assembly source said he was at home.
Recall that after weeks of hide and seek, the Senator representing Kogi West Senatorial District, Dino Melaye, has been arrested.
The National Immigrations Service (NIS) spokesman, Mr. Sunday James, has since admitted that the lawmaker was picked by the Service based on what he termed “instructions”.
Melaye broke the news of his arrest on his Twitter handle and confirmed it in an interview with The Punch newspaper and narrated the drama that followed.
‎”Myself and the Deputy Senate President, Ike Ekweremadu, and others were to be on an official trip to Morocco but while some have gone through the Lagos airport today, others are to depart tomorrow.
“I got to this airport I was checked in and was already in the lounge waiting for departure. Immigration officers invited me that there is a directive from the police that I can’t travel; that I am on their watch list. And I said it was not true, that the INTERPOL said they had not issue an alert on me. I opened INTERPOL’s website and showed them the denial. But they insisted that it was based on the directive from the police.
“I was disembarked and asked me to go to their office (at the airport). They snatched my passport but I snatched my thing back from them. I got it back! I’m still here with them. They circled me and said they were waiting for further instructions from the police.”
He said on his Twitter handle that he was picked up at the Nnamdi Azikiwe International Airport as he made to depart for Morroco for an official engagement. 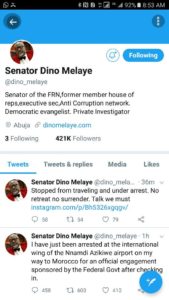 Melaye and the Police have been involved in a queer drama after two men paraded by the Police claimed they worked for him and son of late Kogi Governor, Mohammed Abubakar Audu,  and he supplied them with firearms.
The men were among those who escaped from Police detention in Lokoja, Kogi State, but were later rearrested.