Tinubu meets Buhari in London as diasporans back President

Additional report from www.nan.ng
All Progressives Congress (APC) National Leader, Asiwaju Bola Ahmed Tinubu, was in London to see President Muhammadu Buhari, in what is being interpreted as moves to iron out grey areas on the leadership of the party.
The meeting came as the APC announced a list of its national convention committee headed by the Jigawa State Governor, Badaru Abubakar, who would be assisted by the Ondo State Governor, Rotimi Akeredolu. Mr. Ben Uwajumogwu is the Secretary. The List is as follows. 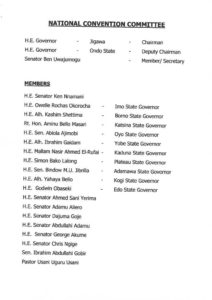 Tinubu is known to be opposed to John Odigie-Oyegun as national chairman of the party, but the President continues to keep his card close to his chest on his preference.
His change of position on keeping Oyegun and others at the national and state levels for an extra year shocked many chieftains who believe he did it to pander to Tinubu, a force to reckon with in South-West politics.
Buhari and Tinubu met behind closed doors, but the bet is on among political analysts that both men are negotiating a common ground.
But also on the same day he met Tinubu President Buhari has assured Nigerians in the diaspora that his administration will not abuse their trust and confidence.
Receiving the Buhari Diaspora Support Organization, led by Mr Charles Efe Sylvester, he said he is happy that there are Nigerians defending the country.
He promised that their confidence in the administration would not be abused, adding: “we will do our best to justify your trust in us, and that confidence won’t be abused.”
He noted that Nigeria is endowed with tremendous human and natural resources, but regretted that “failure of some of the leadership we had in the past led to our not being able to capitalize on resources to improve the lot of the people.”
Saying wicked people plundered the country, “and kept Nigerians poor,” the President added that looking at the condition in which the current administration met the country, without savings and the economy badly vandalized, “we have not done too badly.”
President Buhari said the damage done to the Nigerian economy in the years of plunder was massive, and that government was doing its best to recover some of the loot.
He however said but it was impossible to identify and recover all.
“If they had used 50% of the money we made, when oil prices went as high as $143 dollars per barrel, and stabilized at $100 dollars with production at 2.1 million barrels per day for many years, Nigerians would have minded their businesses. You could almost grow food on our roads, as they were abandoned. The stealing was so much, and they were so inept that they could not even cover the stealing properly. I wonder how all those things could have happened to our country.” the President said.
He commended the Buhari Diaspora Support Organization for deciding to identify with the country, “when you could have stayed here, and being comfortable.”
The Coordinator of the organization, Mr Sylvester, said the group was happy with the achievements of the Buhari administration so far, noting:
“You met a difficult situation, but you have overcome most of them. We are happy with the agriculture revolution, the ease of doing business, the anti-corruption war, the employment of youths through the N-Power programme, and the blockage of leakages in the public sector through the Treasury Single Account (TSA).
“We are proud of the speed with which you recovered the abducted Dapchi schoolgirls. It shows you as a worthy general. We are happy that you have declared for 2019. Majority of Nigerians are happy, but agents of corruption and darkness are unhappy. The same God, who healed you when you were ill, will grant you victory in the 2019 elections. You are a General who does not fear combat, either with Generals or non-Generals. We declare our love and support for you. You are fixing the faulty foundations of our country and second term is when you will build the enduring structure.”

Why I criticised my husband in 2016, by Aisha Buhari