The interesting drama between Kogi Senator, Dino Melaye, and the Police has moved from an airport; to Dino’s palatial residence in Maitama; to the Special Anti-robbery Squad facility in Guzape District; to the streets of Abuja; but has berthed, for now, at Zankli Hospital in Mabushi.
Melaye was moved last night to the National Hospital in the Central Business District by the Police. It was unclear if he was unconscious as it appeared in camera footage on television and social media posts yesterday. 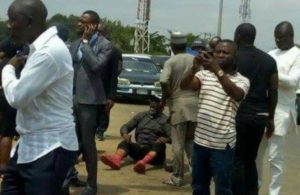 Melaye, after he hit the tar, jumping out of a police van.

Some city residents watched as Senator Melaye jumped out of a police vehicle, was rescued by occupants of two vans, and whisked away for treatment at Zankli Hospital.
Melaye’s version of what transpired has not emerged as he remain in hospital. 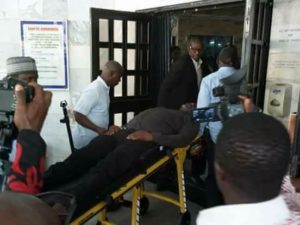 On a stretcher in Zankli Hospital.

But the Police spokesman, Assistant Commissioner of Police Jimoh Moshood gave the Police version of what happened:
“At about 1200Hrs (12 noon) of today Sen. Dino Melaye while in lawful custody of the Nigeria Police Force personnel and being taken for arraignment in Federal High Court Lokoja from Abuja, escaped from lawful custody when hoodlums and miscreants in Two (2) Toyota Hilux Vehicles blocked the Police vehicle conveying Senator Dino Melaye around Area 1 Round About, Abuja and in the process the Senator jumped out of the Police vehicle through the window and was rescued from the Police men by hoodlums and miscreants to an unknown destination.
“The Police team re-enforced and trailed Senator Dino Melaye to Zankli Hospital, Abuja where he was re-arrested. The Senator would be arraigned in court without further delay.
“Meanwhile, one of the Toyota Hilux vehicles used by the hoodlums and miscreants in aiding the escape of the Senator has been recovered by the Police investigation team.
“The Inspector General of Police has therefore directed a thorough investigation into the circumstances leading to the rescue and escape of Senator Dino Melaye from lawful custody.”
At press time, Melaye is said to be receiving treatment, while the hospital remains ringed by armed and fierce looking policemen, apparently waiting to arrest him once he is discharge.