Bayelsa State Governor, Seriake Dickson, has emphasized the need to use sports as a veritable tool to change the mindset of youths in the state.
Governor Dickson who disclosed this during the official draws and kits presentation to the participating teams in Yenagoa, reiterated government’s commitment to sports development.
No fewer than 130 communities and tertiary institutions registered to participate in the second edition of the Governor Seriake Dickson Football Tournament, tagged, “The Restoration Cup 2018″, scheduled to kick-off in few days.
The Governor emphasised that the football tournament is yet another tool in unifying and integrating the communities, and also discovering hidden talents among youths for self sustenance and development.
Dickson said the state government was making plans to support football in all the communities, as he urged the participating teams to take advantage of the tournament to launch their careers.
” I must commend the Central Working Committee, and the private individuals that has supported this competition. I must also commend the participating teams. I encourage you to give your best, as I look forward to be present at the finals. Most importantly, this tournament has come to stay, as I would ensure its continuity, even after my tenure as Governor”.
He added that though the competition had being private sector driven, the successes recorded so far has encouraged government to provide some support for the competition.
Commissioner for Sports, Hon Perekiye Buruboyefe in his remarks, said that the competition was aimed at taking sports development to the grassroots, and would go a long way in discovering football talents.
Also speaking, Director General of the Competition, Ono Akpe, noted that the game was strictly on knock-out basis, and only the final two teams would emerge from the eight local council areas of the state. 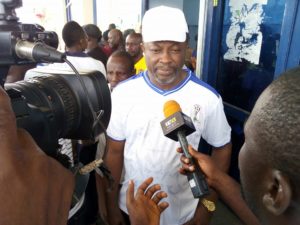 According to him, “The prize money remains the same (N11 million) as the maiden edition. The winners will get N5 million, N3 million for the second best team, and N2 million for the third best team.
“Consolation prizes include, N500,000 for the fourth best team, N200,000 for the best behaved team, N100,000 each for the best goalkeeper, highest goal scorer, and of course, the most valuable player,” he explained.
With the draws now concluded, action is expected to get underway, at selected centres in the various communities.
He appealed to well meaning Bayelsans and Nigerians alike to support this initiative that would foster peace and harmony amongst communities in the state.
” I must salute the support and contribution of people like Ken Etete, Amagbe Kentebe, AK construction group who have have stood solidly by us. I hope other well meaning Nigerians will work hand in hand with us to celebrate the great, talented youths of Bayelsa,” he added.