By Paul Mumeh, Media Assistant to Senator David Mark.
Immediate past president of the Senate, Senator David Mark at the weekend took stock of his 70 years sojourn on earth and renewed his convenant with God to serve him and humanity faithfully.
Senator Mark told a crowded gathering in Abuja to commemorate his birthday that “I have resolved to serve God and humanity ceaselessly for the rest of my life .
“I will intensify my prayers and do the work of mercy for peace and unity of Nigeria where genuine friendship and brotherhood, devoid of parochialism reigns. 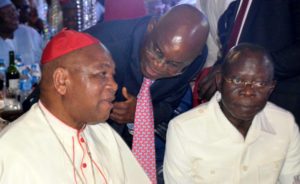 “When I was growing up, I made friends across board devoid of ethnicity, tribe or religion. And we saw ourselves as brothers and sisters with a common destiny. But what we see today is a celebration of ethnic or religious champions in our national life.
“This is not the Nigeria of our dream. We must rise up to re-orientate our people in order to reverse the trend for good. We must see ourselves as one people with a common destiny and purpose.
He expressed optimism that a better Nigeria where every one is free to live and pursue his or her legitimate ambition in any part of the country without fear of intimidation or molestation is possible if, according to him, “we see ourselves as brothers and sisters ”
President Muhammadu Buhari who spoke through his Special Adviser on Natonal Assembly Matters, Senator Ita Enang described Mark as a brave soldier and astute politician who has made positive impact in the development of the nation.
In his remarks, the President of the Senate, Senator Bukola Saraki showered encomiums on his predecessor for the foundation he laid in the Senate as well as his contributions to national development.
Saraki requested Mark to always make his knowledge and wealth of experience available for upcoming leaders to profit from, pointing out that “Mark is a rare gift to Nigeria”.
Also speaking, the Governor of Sokoto State, Alhaji Aminu Waziri Tambuwal described Mark as a patriotic and relentless public servant who over the years demonstrated unquestionable loyalty to his fatherland.
National Chairman of the Peoples Democratic Party (PDP) Uche Secondus praised Senator Mark for his steadfastness, recalling that in the wake of the gale of defection that hit the Party after its defeat in 2015, the former Senate President stood firm, when he said he will remain in PDP no matter the odds.
Senator Mark had insisted that he will not abandon the PDP saying “I will remain the last man standing, even if others decamp”.
Mark’s classmate, General Alwali Kazir who spoke on behalf of Nigerian Defence Academy (NDA) Course 3 Alumni association commended Mark for his relentless and unblemished service to the nation.
Earlier, the chairman of the occasion, General T. Y. Danjuma noted the indomitable spirit of Mark which he said is needed to navigate through the murky political water in Nigeria.
Eminent Nigerians including four former Presidents of the Senate, Iyorchia Ayu, Adolf Wabara , Anyim Pius Anyim , Ken Nnamani , the incumbent Saraki, governors, past and present members of the National Assembly , Catholic Archbishop of Abuja, Cardinal John Onaiyekan , captains of industry among others attended the event.