Senator Dino Melaye was on the floor of the Senate Chamber berating the Nigerian Police and its leadership; but less than a kilometre away, the same Police from its headquarters was declaring him wanted, along with the son of late Kogi Governor, Mohammed Audu.
The Police is not done with this comic drama. It announces, through a statement by the Kogi State Commissioner of Police, Ali Janga, that two men that indicted Melaye and Audu are among six that escaped from Police custody in Lokoja, the Kogi State capital.
Swiftly, Janga was removed by an embarrassed Inspector-general of Police, Ibrahim Idris, who also transferred out of Lokoja the policemen on duty when the alleged escape took place.
Janga has been replaced by CP Esa Sunday Ogbu, Commissioner of Police, Federal Operations, Force Headquarters, Abuja.
Janga’s statement earlier in the day reads in full: “The Nigeria Police Force, Kogi State Police Command today 28th March, 2018  received a news that six (6) suspected criminal elements namely; Kabiru Seidu a.k.a Osama, Nuhu Salisu a.k.a Small, Aliyu Isa, Adams Suleiman, Emmanuel Audu and Musa Mohammed who were under detention at the ‘A’ Division Lokoja escaped from lawful custody. Four of the suspects were on court remand including two that indicted Senator Dino Melaye and Mohammed Audu. 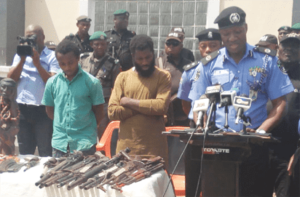 The men who allegedly fingered Melaye as their armoured with Police spokesman, ACP Jimoh Moshood

“Consequently, all the six suspects, Senator Dino Melaye and Mohammed Audu were sent for watch listing and red notice by the INTERPOL for immediate arrest any where we see them.
“The Command hereby appealed to the members of the public to assist the Police with useful information on the whereabouts of the suspects by reporting to the nearest Police Station.
“Investigation into the unfortunate incident is ongoing, while the thirteen (13) Police Officers who were on duty when the incident occurred were defaulted and detained for interrogation.
“Members of the public are hereby enjoined to go about their lawful duty as the Command is determined in ensuring adequate security of lives and property in Kogi State.”
Curiously, as the Police declare Melaye wanted, there are not less than 300 policemen in the National Assembly complex in Abuja, where he is. On any day federal legislators sit, there are hundreds of police orderlies for legislators, apart from officers and men permanently stationed there. Though Melaye cannot be touched on the Assembly grounds, his immunity does not extend beyond there.
Last week, the Police released information that some men caught with firearms had implicated Melaye as their arms supplier. Also, Melaye had complained on Twitter that the directive for withdrawal of police ordered was targeted at him to leave him open for attack.
On another level, the Independent National Electoral commission (INEC) has commenced the recall process for Melaye as he continues to release videos mocking his State Governor, Mr. Yahaya Bello.

Workers get caught up, as FAAC shares N647 billion