House of Representatives Speaker, Yakubu Dogara, has announced the passing away of Deputy Leader of the House, Hon Umar Buba Jibrin, after a protracted illness. He has already been buried in Lokoja, Kogi State. 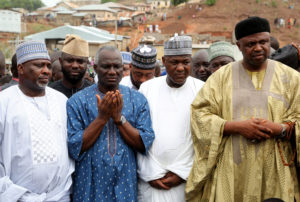 President of the Senate, Dr. Abubakar Bukola Saraki, expressed sadness over the passing of the lawmaker, who died in the early hours of Friday.
Saraki said that Nigeria has lost another seasoned legislator and champion of the common man.
“My thoughts and prayers are with the family and constituents of the late Rt. Hon Umar Buba Jibrin, deputy leader of the House of Representatives, who passed away early this morning.
“As a former Speaker of the Kogi State House of Assembly, Rt. Hon. Jibrin, was a seasoned legislator and a conscientious lawmaker who always put the interests of the common man first — and championed them at the federal level. He will be greatly missed.
“My deep condolences go out to Speaker Dogara, his colleagues in the House of Representives and the government and people of Kogi State over this great loss,” Saraki said.
Dogara, on behalf of the House condoled his immediate family, his wives, children, relations, his constituents and people of Kogi State.
“Hon Buba was an upright man, a leader per excellence, a patriotic, committed and hardworking lawmaker, worthy representative.
“He was a one time speaker of Kogi State House of Assembly
“He will greatly be missed by all. May his gentle rest in peace,” he said.
The All Progressives Congress (APC) also mourned late Jibril, noting “his vast contributions to the institution of democracy as a former Speaker in the Kogi State House of Assembly and as a longstanding member of the House of Representatives who moved many motions and initiated bills geared towards a better life for Nigerians.”
“The Late Jibril was a grassroots politician dedicated to the service of his people. He would sorely be missed,” APC said through its spokesman, Mallam Bolaji Abdulahi.