Source: www.channelstv.com
Former President Olusegun Obasanjo says the appointment of Nigeria’s service chiefs is not in line with the Federal Character principle as provided by the Constitution.
The former President who said this on Thursday at an event 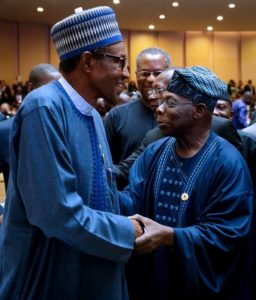 in Abeokuta, the Ogun State capital, noted that appointment into major offices must bte fairly distributed across the country.
“The Federal Character principle, as espoused in our Constitution, was to guide the leadership to search for competent holders of major offices to be distributed within the entire nation,” he said.
According to Obasanjo, the essence is also to “avoid the concentration in a few ethnic hands or geographical places, as we currently have in the leadership of our security apparatus.”
President Muhammadu Buhari had been criticised over alleged lopsidedness in his appointments which some claimed mostly favoured the northerners.
The Presidency swiftly responded in a statement, saying: “It is, indeed, false for anyone to say that President Buhari’s appointments are lopsided. From all records, majority of the President’s appointees across different portfolios are not from the North.”
But former President Obasanjo had also criticised President Buhari’s government and called for a movement which he said would help to save Nigeria from its challenges.
One week after he made the call in a statement, a group – the Coalition for Nigeria Movement – launch on Wednesday in Abuja.
The former President, who also registered as a member of the movement on Thursday, said adequate attention was not being given to nation building.
Former President Obasanjo speaks after registering as a member of the Coalition for Nigeria Movement
He pointed out nation building as one of the important areas in the country that should be given priority with improved attention.
“We seem to have taken nation building for granted. Nation building must be given continued attention to give every citizen a feeling of belonging and a stake in his or her country,” he said.
Addressing members of the group, Obasanjo said it must be the new vehicle to give hope to the youths, dignity, and encouragement to women, as well as security, confidence, and a promising future to all Nigerians.
“It must work to bring about a new democratic and efficient Nigeria. The movement must speak up boldly and bluntly about the truth, but politely in accordance with African culture,” he said.
The former President stressed further that the movement would act collectively with political awareness, social responsibility, as well as sustained and sustainable economic development and progress.
He, however, warned members that timidity and cowardice must not be part of the group’s culture, and neither must there be indifference.
Obasanjo then called for support to build a new Nigeria that is “unshackled, united, dynamic, strong, secure, cohesive, stable, and prosperous at home and respected outside and as result, is able to play decisive role assertively within the comity of nations.”