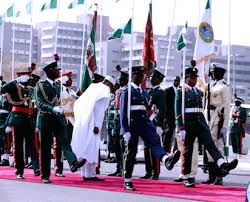 Additional reports from Chuks Moses, in Awka.
From Abuja to Kano; Lagos to Calabar, it was honours galore as President Muhammadu Buhari and State Governors paid respects to fallen soldiers who gave their lives to protect the territorial integrity of the nation; but in Awka, Anambra State, two serving soldiers slumped and fears were being expressed at press time on the state of their health.

Occasion was the annual Armed Forces Remembrance Day, where an immaculately dressed President and Commander-in-Chief, his deputy, Prof. Yemi Osinbajo, and service chiefs each laid wreaths for the unknown soldier.
The process was repeated by states’ chief executives country wide.
Two soldiers tragically slumped at the 2018 Armed Forces and Remembrance Day ceremony at the Dr Alex Ekwueme Square, Awka, Anambra State.
The two personnel, one each from the army and the navy slumped while on parade.
They were immediately given first aid medical attention by a combined team of medical personnel including the Anambra State commissioner for Health, Dr Josephat Akabuike.
They were subsequently evacuated from the field to undisclosed hospital for more medical attention.
An army source who pleaded anonymity told our correspondent that  the victims might have been affected by what he called  ‘sun-stroke’ .
According to him, “It’s not unusual to see such occurrence during parades, more so under intense  sunshine. We are hoping they would come back in the end.
A source at the Chukwuemeka Odumegwu Teaching Hospital, said,” The soldier here is in a critical condition. He fell flat on his forehead, hitting hard on the tar floor.
“He is at the intensive unit here. We pray he would survive. We suspect he had malignant malaria which aggravated his condition”.
Governor Willie Obiano in his Armed Forces Remembrance Day speech enjoined Nigerians to remember the families of the nation’s fallen heroes and pray for the souls of the departed and charged the officers to continue to have  the courage to selflessly defend the country.
He said they had done much to keep the nation united, saying “but for the internal and external wars these fallen heroes had fought, we would not have been enjoying the peace we have now’’.
The Anambra State chairman of the Nigeria Legion,  Major Nwankwo Ifeanyichukwu,rtd, called for a better welfare for  members of the legion.
He expressed worries that despite the contributions of the retired and dead military men, their families were still passing through harrowing economic experiences due to poor remuneration and welfare.