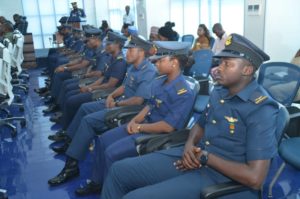 A cross section of the winged pilots.

The Nigerian Air Force (NAF) yesterday, 17 January 2018 winged 11 additional young pilots as part of its human capacity development efforts.
Among the newly winged pilots were 2 female Regular Combatant officers who qualified as pilots on fixed wing aircraft.
The young pilots, who recently completed their one year flying training course at Westline Aviation, South Africa, were decorated with their pilot wings by the former Chief of Defence Staff (CDS), retired Air Chief Marshal Paul Dike, who was the Guest of Honour at the occasion.
In his remarks, retired Air Chief Marshal Paul Dike expressed his happiness at the current state of affairs in the NAF, adding that “I am seeing an air force that is much better than how I left it years ago”. 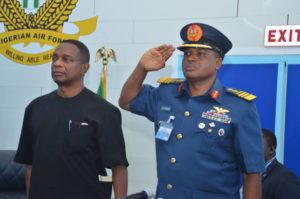 The former CDS noted that the NAF cannot achieve its statutory role of defending the territorial integrity of the country by air without having adequate pilots. He stated that he was therefore glad that the current NAF leadership was making sufficient efforts in the area of human capacity development.
According to him, the role of air power in today’s security environment cannot be over emphasised, as it had become the decisive factor in determining the outcome of any combat operations. The former CDS congratulated the new pilots, noting that they had been given top-notch technical education.
He further stated that the new pilots were coming into the NAF at a unique time when the country was facing numerous security challenges. Consequently, he charged the newly winged pilots to be bold, disciplined and innovative in the discharge of their flying duties to justify the confidence reposed in them. 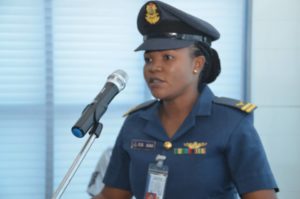 One of the female winged pilots.

While delivering his opening address, the Chief of the Air Staff (CAS), Air Marshal Sadique Abubakar, stated that the ceremony was unique in that, it was the first time in the history of the NAF that female Regular Combatant officers would be decorated with wings as qualified pilots.
The CAS equally disclosed that by February 2018, 14 more pilots, 10 from the International Aviation College, Ilorin and 4 from South Africa, would complete their flying training. “By the end of February therefore, the NAF would have successfully winged 72 pilots. Furthermore, there are an additional 74 pilots that are training to qualify for awards of NAF wings. Out of this number, 64 are training in Nigeria while the remaining 10 are training outside Nigeria,” the CAS said.
The NAF has also trained 23 Instructor Pilots in the last two years while seven are currently undergoing training abroad with three in the US and four in Jordan, according to him.
The CAS stated further that the human capacity development efforts of the NAF had greatly enhanced NAF force projection capability beyond the shores of the country. According to him, the air power capability of the NAF would further be enhanced upon the receipt of additional helicopter gunships procured for the Service by the Federal Government.
The CAS therefore charged the newly inducted pilots to be prepared for the onerous task ahead of them as they fit into the operational flying environment. Air Marshal Abubakar also urged the new pilots to key into the progressive tread in the Service and be ready for duty wherever and whenever they are called to defend the nation’s sovereignty and those values it holds dearly.
Earlier in his welcome address, the Chief of Training and Operations, Air Vice Marshal Nurudeen Balogun, said the winging of the new pilots would certainly boost the operational capability of the Service. He said that though a civil institution, the NAF had requested the management of the Westline Aviation College to tailor their training syllabus to conform to the operational requirement of the NAF.
Therefore, while at the college, the officers took part in the normal Private Pilot License, Instrument-Rating, Multi-Engine Rating and Night Rating Programmes. In addition, they were introduced to operational flying such as low level Navigation, Formation Flying, Reconnaissance flying and Vehicle Escort flights. According to him, the method of training saved the Service valuable time and scarce resources.
The newly winged pilots started their flying career at 401 Flying Training School in Kaduna in November 2016. Upon completion of their initial flying training in Nigeria, they proceeded to South Africa for the basic flying course that qualified them as licensed pilots, hence the winging ceremony.