Copyright 2021 - All Right Reserved
Home Faith Christians Only Material: Why there is politics in churches 14
Faith

In the church of God, Christ must be all and in all.
All About Christ
In the choices for leadership in the Church it is not about charisma or intellect or oratory. It is about Christ.
In God’s work, it is not charisma or intellect or oratory that leads. It is Christ. When charisma or intellect or oratory leads, it is death to the church or christian organization. When Christ leads, it is life to the church and organization.
As shown before, if Christ becomes enthroned in leaders A, B, C, D, the sum is Christ. But if Christ is enthroned in leaders A and B, and SELF is enthroned in leaders B and C, the result is not CHRIST but CRISIS.
Political Drama
A Christian leader in a known denomination moved into a country in Africa to pioneer a church planting work. At a point, he sensed that the headquarters in his country may want to remove him, and he began to work on registering an alternative work, something he would fall back on if he is removed. Suddenly, he was summoned to the headquarters. He was told that the overall leader would want to talk to him. He flew in to the country leaving his family behind. He began to report every day to the office, and no one talked to him. Weeks turned to months, no leader met with him. He took a flight and went back. By the time he got to his base, the church had replaced him with another pastor. He packed his things and left. He started another work but did not want to be independent. He decided to submit the church to another denomination in his country. Again, he flew to his country to 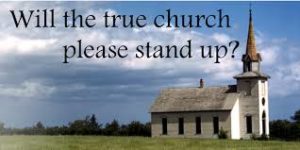 formalise the handover of the church. By the time he came back, the headquarters had gone behind him to make his assistant who was an indigene, the pastor of the church. Again, he packed his things and left.
Not long after this, this church brought a pastor from the headquarters to replace the indigenous pastor who in a rage, took the papers of the church and the piano and went away. What kind of churches are all these? Are these part of Christ’s Church?
When there is no preaching and knowledge of the cross, this is what you get- CRISIS. But where there is the preaching and knowledge of the cross, CHRIST takes over, and right leaders will emerge to advance God’s work on earth and usher in His kingdom.
This concludes the series, “Why there is Politics in Churches.”
●●Ndukwe, a Lagos-based minister can be reached via festus-felicia@gmail.com.

What Benue indigenes told Police IG to his face