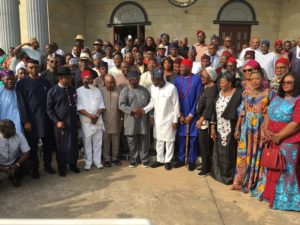 Many more Nigerians and groups are visiting and commiserating with the government and people of Benue State. The latest is a combined Afenifere/Ohaneze/ Niger Delta group.
The visit is coming amidst speculations that the ruling All Progressives Congress (APC) is arranging a visit after the opposition Peoples Democratic Party (PDP) visited to commiserate and refresh the displaced people.
But the APC in Abuja is saying it is not inclined to playing politics with or running a media show with the tragic events in Benue State.
Sadly, however, the Presidency and its operatives remain adamant, neither sending a delegation from there or sending an official federal government one, as admonished by Senator Shehu Sabi, who took exception to the visit by Benue leaders, led by Governor Samuel Ortom, to President Muhammadu Buhari.
His words in a television interview: “I believe in our African tradition, when you are bereaved, it is people that visit you, you don’t go visiting people. The Benue elders need to stay at home and the Villa should go to Benue and not Benue coming to the villa.
“When we have a crisis is some parts of the country, it is symbolic to see the leadership of the country moving to that very spotlight, giving the people hope, confidence and assurance. My position is that there is still the need for a special delegation if the President cannot make it, to go to Benue and commiserate with the people
“We are faced with a serious crisis, a national tragedy and a national emergency, one in which hundreds of lives have been lost in different parts of the country. And it is very clear to us that if this issue is not contained or curtailed, it will expand into a national crisis.
“I believe that if there is any person that the attention is very much needed now, it is the President and the political class, particularly those in the ruling establishment. They have the duty to support and advise, to see how we can bring this to an end.
“I have seen this crisis being looked at from a different perspective. Some are seeing it from the sectional, religious and ethnic perspective and that colour the problem. My position is that the Federal Government has the duty to work with the state government and see that this is resolved.”
“It is very clear to us that what is in the mind, focus and the priority of the political class is the 2019 general elections and people are dying. My call is that the President should put a stop to this; Governors leaving their duty post, coming to the Villa every day endorsing the President while the states are burning.
“So, my position is that the President is the person who should lead the campaign to end this problem.”
There were whispers in Makurdi that the visit of the APC is being financed from Benue, but there is no independent confirmation of the information that N150 million has been committed to the venture.
Anger has been building up against the ruling party in the State, following what has been described as the “insensitivity at the centre”.
In Abuja, the National Publicity Secretary of the APC, Mallam Bolaji Abdulahi, debunked allegations of insensitivity on the part of APC, insisting that when the Benue 73, killed by herdsmen in Guma and Logo Local Government Areas on new year’s day, the National Chairman of the party, Chief John Odigie-Oyegun, led a high-powered delegation of 12 National Working Committee officers to attend the event.
“It is not going to Benue and calling press conference and doing show out of it. What is happening is tragic, it is not something to be scoring political points with. We fully participated in the activities of the burial led by the national chairman himself, but we don’t feel it is something to be playing politics with, that is why we did not make it a media event.”