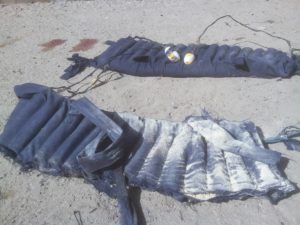 Two of the suicide bombers, strapped with suicide vests had attempted infiltrating Gamboru town at about 6.45 am when they were sighted by a joint patrol team of vigilant troops and Civilian JTF at Unguwar Yobe area shortly before entering the town. They were halted by the patrol team from a safe distance and were ordered to unstrap their suicide vests, to which they vehemently declined. All efforts and entreaties by the patrol team to make the suicide bombers remove their IED vests failed as the duo adamantly approached the troops armed with their IED vests. They were immediately neutralised by the troops, while the Explosive Ordnance Disposal Team (EOD) safely unstrapped and detonated the suicide vests.
A third female suicide bomber was detected and intercepted within the same general area and subsequently confessed to the joint patrol that she and the other two terrorists had been dispatched at about 3.30 am on Tuesday to unleash mayhem on Gamboru town. She also revealed the location she had hid her suicide vest and led the troops to recover it. The recovered vests and the surviving suicide bomber have been taken into custody for further interrogations.
We call on the general public to be more alert and vigilant, while going about their daily activities in their various communities to detect suspicious persons and inform the security agencies accordingly…. 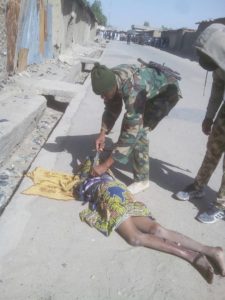 STOP HARBOURING FLEEING BOKO HARAM TERRORISTS
This is to warn all residents in the North East not to harbour the remnants of the Boko Haram terrorists who are trying to flee from their waterloo. Credible intelligence has revealed that several of the criminal Boko Haram terrorists have resorted to taking refuge in dry wells and other hideouts in some communities along their escape routes from the Sambisa forest in order to evade the sustained bombardments from air and ground troops of Operation LAFIYA DOLE.
No one should shield these blood thirsty terrorists. Any unpatriotic and unscrupulous persons especially in the North Eastern states of Adamawa, Borno and Yobe found providing safe sanctuaries or any assistance to the criminals will be treated as an accomplice and given same treatment as a terrorist.
All are advised to take the patriotic path by calling the Nigerian Army Information and Call Centre Number 193 to report any fleeing terrorists or report immediately to the nearest security agency.
You are warned. Do not be an accomplice of the terrorists.