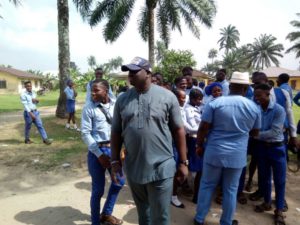 Gbagi and some of the students.

By Ejiro Oniyan
Gbagi Foundation under the chairmanship of Olorogun Kenneth Gbagi paid the 2017/2018 West African Examination Council (WAEC) enrollment fee for all the eligible students of Oginibo Secondary School, Oginibo who are mainly indigenes of Oginibo, Imode, Eyara, Obi-Ayagha and other communities in Ughelli South Local Government Area of Delta State.
Presenting the draft cheque of the enrollment fee to the school principal at Oginibo Secondary School, Oginibo on Friday 15th December, 2017 by the director of Gbagi Foundation, Chief Emuoboh Gbagi, the Executive Assistant to Delta State Governor on DESOPADEC matters stated, this was one of the ways the foundation is assisting those who will be leaders of tomorrow, adding that because all fingers are not equal, those who are well placed in society should be able to put smile on the faces of people living around them to bridge the gap between the rich and the poor in society.
The Ame r’ Ovie of Ughelli Kingdom added that the foundation  is posed to do more in the area of education; just as he said, education is the only legacy one can bequeath a child, assuring the students and the school authority of more support from the foundation.
While receiving the cheque from the director of the foundation, the principal of the school, Mr. Naibe E. A. thanked the management of Gbagi Foundation and most especially Olorogun Kenneth Gbagi for the timely intervention of the payment of the WAEC fee for the entire students of the school which parents, students and even the school authority would have found difficult to enrol them this year due to economic hardship being experienced in the country today.
The principal said that it was a remarkable thing in the life of the students and described it as a “rear gesture” which he wants people to emulate in the state to enable our children to reach the height of their dream in life.
In a separate interview, Atanomeyovwi F.B. and Rita Oyibu, Vice Principal, Academics and Examination Officer of the school respectively said, this kind gesture beats their imaginations, saying that they have not see it in their entire service which they said was a one in a million. They said, Olorogun Gbagi through the foundation has further demonstrated that he is father to the fatherless as he has wiped tears from the faces of those who were in a difficult situation.
Responding on behalf of the students, Goodluck Avwiroroduemu, Senior Prefect of the school said he appreciate Gbagi Foundation for coming to their aid when they thought all hope for them to enrol the 2017/2018 WAEC has been lost.
He  therefore promise that the students will not disappoint the foundation for is cheerful given it rendered them at the time of need.