Copyright 2021 - All Right Reserved
Home Features Conflict with the Earth: When Mother Nature fights back
Features

Conflict with the Earth: When Mother Nature fights back

From Omeiza Balogun, Benin.
When 64 years old, Mr. Iyasele Emonyon of Idunwele-Ewu, Esan Central Local Government Area in Edo State, Nigeria, returned home at about 3:00pm, 22nd May, 2017, his wife was nowhere to be found and his lunch was not served.
He was a little bit angry but thought that his wife may have rushed to the market on her return from the farm to get some items for the household or she has left for the meeting of her association.
As he awaited her arrival, a woman (a member of the wife’s association) came to inquire about his wife complaining that they are yet to see her in their meeting, Emonyon on hearing this he became agitated and suspicious.
He quickly moved around the neighbourhood asking if anyone had seen his wife but the last time anybody did was when they saw her leaving for the farm.
Without waiting further, Mr. Emonyon rushed to the farm and after much search he found the lifeless body of his 60 years old wife, Mrs. Martina Emonyon a victim of persons suspected to be Fulani herdsmen. 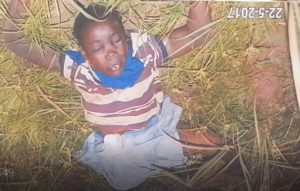 Lifeless body of Mrs. Martina Emonyon
On that same day in a neighbouring community of Eko-Ewu about one kilometre from Idunwele-Ewu, 82 years old Madam Christiana Aliu Ikheloa’s body was discovered on her farmland land gruesomely murdered by the same suspected herdsmen. 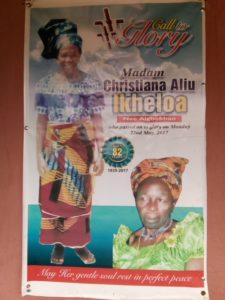 Obituary announcement of Madam Christiana Aliu Ikheloa
The recent clashes between farmers and herdsmen in Nigeria have been on the increase in the last seven years with different narratives being adduced as the reason for this vicious cycle of attacks and counter attacks. The situation has led to the death of thousands with women, children, and the vulnerable recorded as the highest victims; while others are forced to flee their homes resulting to one of the worst humanitarian crises in the country. 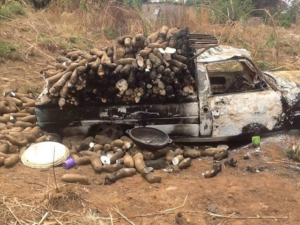 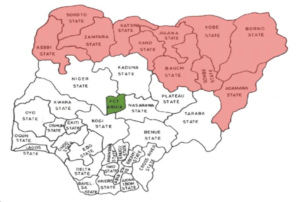 According to West African Science Service Centre on Climate Change and Adapted Land Use, WACAL, in their 2010 – 2014 report, the Lake Chad which hitherto served as source of water for irrigation, fishing and other uses providing livelihood for millions around the region has lost over 90% of its water. According to available reports, the Lake which measured more than 25, 000 square kilometres (9, 700 square miles), now covers just 1, 500 square kilometres (580 square miles). 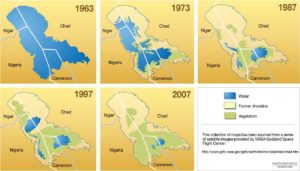 The shrinking Lake Chad Region (Source: ECC Platform)
On the way to avert the crises Mr. Bassey said real climate action is needed to address the spate of violence.
‘’We have pockets of forests and dense area in the Sahel. This can be scaled up across the region. Our relationship with the environment has been so careless and carefree so much so that Southern Niger Republic is greener than Northern Nigeria’’.
To reverse this unfortunate situation, Mr. Bassey said it was time to b

Why I prefer Obiano to Obaze, Nwoye, by APGA chief Egwuoba-Ezekwesili