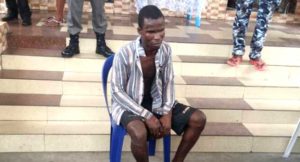 At least 20 villagers have been reportedly killed overnight by herdsmen in Ancha village in Bassa Local Government Area; while escapee alleged ritualist from Port Harcourt, Rivers State, Maxwell Ifeanyi Dike has been re-arrested in Barkin Ladi, near Jos.
Anger and frustration, as well as mourning filled the air as confirmation came that the dead included six children.
The herdsmen, alleged to have been of Fulani stock, were said to have shot and matcheted many to death, while the injured were rushed to hospital as others fled the village..
A military commander, Major-General Atolagbe and the State Police chiefs were early callers to the community where the young men were advised to spend their nights acting as security look-outs to protect villagers.
Meanwhile, the media is reporting that Ifeanyi, the alleged ritual killer who raped, killed, and mutilated the body of his eight years old cousin, was nabbed  by men of Special Anti-Robbery Squad in the state in the early hours of Friday and is currently under secure arrest.
According to Channels Television,the suspect allegedly broke into the home of an unnamed resident and stabbed him in what appears to be a robbery incident.
Channels Television reports further on its website: “The Rivers command is currently working with its counterpart in Jos to bring him back to Port Harcourt to face the law.
“On August 21, 2017, Ifeanyi Dikesuddenly took to his heels and disappeared into darkness while he was being interrogated and prepared to be moved to where he would be detained at the state’s Criminal Investigation Department.
“The suspect is a 200-level student of the University of Port-Harcourt, who was earlier arrested by the Rivers State command of the Nigeria Police for allegedly raping and killing an eight-year-old girl and cutting off some parts of her body for ritual purposes.
“The Police Public Relations Officer in the State, Nnamdi Omoni, had said that the suspect was on his way to dispose of the remains of the girl before he was arrested.
“Omoni warned parents to monitor the movements of their children and be wary of those they allow to have access to them.
“The father of the girl, who was part of the search and rescue team since his daughter disappeared on Friday, had identified the suspect as his cousin.”

Shameful President was enjoying state dinner while 40 herders were killed –...