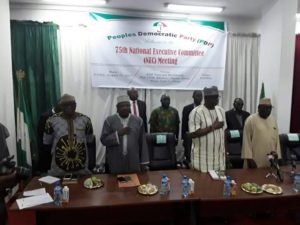 Party stalwarts of the Peoples Democratic Party (PDP) began streaming into the Eagle Square, venue of its Non-elective Special National Convention as early as 9:00 a.m.
Primarily, they are arriving to endorse the recommendation of the Governor Arthur Okowa-led convention committee, as done by the National Executive Committee yesterday night.
The 75th Peoples Democratic Party (PDP),  National Executive Committee (NEC) closed the Friday at the National Secretariat with a resolution to extend the tenure of Senator Ahmed Makarfi National Caretaker Committee by four months.
Within the period, the committee is to hold elections to elect National Working Committee (NWC) members at a national convention..
The fate of many States’ parallel executive committees will be decided this Saturday.
They came aboard as a result of the crisis foisted by the disagreement between Makarfi and the sacked Senator Ali Modu Sheriff leadership.
Sheriff’s NWC, installed by a Port Harcourt Court of Appeal, was sacked by a Supreme Court judgement.
Those in attendance at the NEC meeting were Governor of Ekiti state and Chairman of PDP Governors Forum, Mr. Ayodele Fayose, Governors of Taraba state, Darius Ishaku; Gombe state, Dr. Ibrahim Hassan Dankwanbo; and Rivers state, Chief Nyesom Wike,
Two former Senate Presidents, David Mark and Anyim Pius Anyim were also in attendance, as well as former Governor of Akwa Ibom state and Senate Minority Leader, Chief Godswill Akpabio.

SERAP report on power based on ignorance, laziness, Jonathan

Let Atiku, Obi, others show their medical records before Asiwaju Tinubu can do...