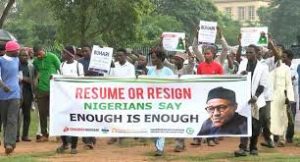 The protesters at the Unity Fountain, Abuja.

By Shitile Mbayansa, Abuja.
Those hoping that President Muhammadu Buhari will resign his exalted office are living in neverland, the presidency has said.
Why? He has not violated any law of the land keeping away from his desk in the last 90 days, his spokesman, Mr.Garba Shehu, insists.
It is exactly three months since the President left the country for his deputy, Yemi Osinbajo, to run, though he still wields the powers of a Commander-in-Chief since only one person can hold that office in any country at any point in time.
There have been quiet speculations of a heavily-guarded secret negotiation but no one has yet whispered it in the open.
Sources pointed to the calibre of visitors to Buhari in London, but some others say they account for nothing and the President will resume office soon.
Shehu, Monday, said those protesting on the President’s 90 days absence reserved the right to do so.
“They are exercising their rights in line with the constitution of this country. Of what use or value is a democracy in which citizens cannot embark on peaceful protests. So we respect their right to convene or undertake peaceful protest,” Shehu noted
He said further: ‎”On the issue of whether the President should resign or disclose or whatever, I think they are stepping outside the laws of this country.
“Anyone conversant with the constitution of this country will have noticed or seen that Mr President has complied 100 percent with the requirements of the constitution of this country.
“He has handed over power to the Vice President relying on the constitution, and the Vice President is carrying out with the affairs of this country. He is undertaking activities of government in line with the constitution in a way that the President himself has given words of commendation.
“So, the president has not breached any law. What he has done is perfectly in line with the constitution of this country and people are looking for things to say. I think they should do their research very well.”
Channels Television reported on its website www.channelstv.com that some youth groups under the aegiss of Concerned Nigerians have defied the early morning showers in the Federal Capital Territory to protest the non-disclosure of the president’s health status.
Speaking at the Unity Fountain in Abuja, members of the coalition say that the long stay of the president abroad has resulted into a near comatose system.
They therefore asked President Muhammadu Buhari to either resume or resign.
Among those leading the protest were social activists such as Charles Oputa (Charlie Boy) and President Campaign for Democracy, Bako Usman.
Many supporters of the group have also taken to social media to air their views on why the President should resume or consider resigning..
Additional reports from www.channelstv.com.

Not all gloomy, fertiliser price crashes, as NSIA intervenes