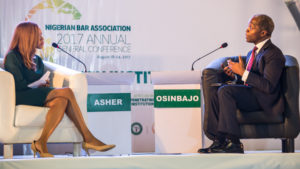 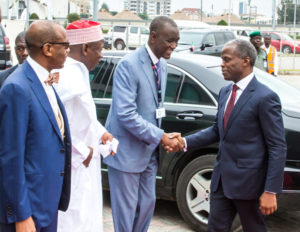 Former Acting President, Professor Yemi Osinbajo fully heaved a sigh of relief Monday as he briefed his principal and generalissimo, Muhammadu Buhari, on what took place in his absence. Buhari comprehensively took over power as President and Commander-in-Chief, after 103-day medical sojourn in London.
Osinbajo even had time to be at the Nigerian Bar Association (NBA) conference in Lagos, now that his hair has been let down, after playing acting president. What many did not know is that he was not acting commander-in-chief, because the tradition almost the world over is that a country cannot have two commanders-in-chief alive at any point in time.
Having aged considerably in the last 100 days, many point to his relaxed mien in Lagos.
Elsewhere, the President’s take-over speech was hailed as outstanding by his overjoyed party’s national chairman, John Odigie Oyegun.
Oyegun is believed to be sitting on his chair, courtesy of Buhari; so, like a commentator said, “wetin he for talk before?”. Others, like Oby Ezekwesili, said it was a terrible case of a misplaced opportunity.
From Kogi came anger for the temerity of fawning Governor Yahaya Bello to have declared a Monday public holiday to show his infantile loyalty, which a political analyst described as “exemplary idiocy”.
On Buhari’s applauded speech, the same analyst had this to say:
“Never seen a more vacuous presentation.It was placid in lexis and structure.
“Even if he was doing a paragraph per week during his endless foreign sojourn, he should have done better.”
It wasn’t without its fun as a Senator, not believing the President was at his desk asked a journalist: Is Buhari in his office?
Journalist: He is in za ozza room.
His response: 😁😁😁😁.
Nevertheless, Villa sources say the seat of power has become ‘bubbly’ again.