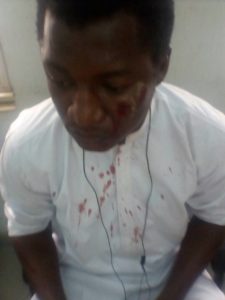 Charly Boy should have restricted himself to the Unity Fountain in Maitama District of Abuja. His foray  into the “popular side” called Wuse Market almost cost him his life as an irate mob of mostly youths of northern descent beat him up.
Security operatives saved him from the angry mob, who apparently were supporters of ailing President Muhammadu Buhari.
The Wuse Market was shut down for a while for nerves to cool down as vehicles belonging to his group were evacuated.
Reactions were being expected from the 66 years old Charly Boy, who has taken it upon himself to lead the protest asking Buhari to resume or resign.
An eyewitness narrated how journalists followed the entertainer to Wuse Market after he announced, a little too loudly, he was going there for a rally.
At the Wuse Market gate, the security men attempted to stop the crowd from going in, but as soon as Charly Boy arrived in his BMW convertible, the market security men were overwhelmed.
The protesters proceeded to the inner recesses of the market.
“My suspicion is that that announcement at the Unity Fountain triggered the countermeasures to neutralise the #OurMumuDonDo group led by Charly Boy. As soon as he started to do his rally, the Hausa boys began to stream in shouting ‘Sai Baba’.
“They appeared organised from my point of view. There were easy recruits no doubt, but something about their co-ordination was too good to be a spontaneous thing.
“Before anyone knew it, stones began to fly at him as the boys encircled the entertainer and his group. They beat him up, and it was a young man who dragged him out to his vehicle for his escape.”
A source said journalists were also attacked and bloodied, while some other persons sustained serious injuries.

OBJ, Heaven, and his voice: A Whatsapp debate