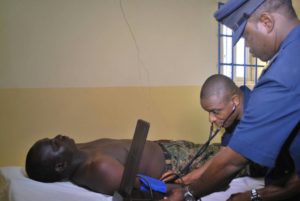 By Air Commodore OLATOKUNBO ADESANYA, Director of Public Relations and Information, Nigerian Air Force
The Nigerian Air Force (NAF) Medical Services Branch has commenced a 2-week de-induction programme for NAF Special Forces returning from combat in the North East.
The de-induction programme, which is at the instance of the Chief of the Air Staff, Air Marshal Sadique Abubakar, is the first of its kind in the history of the NAF.
It is aimed at ensuring the physical and mental well being of combatants before they are reunited with their families and re-integrated into the larger society.
The programme is also to ensure that personnel with post-traumatic stress disorder such as anxiety, nightmare and psychological depression are adequately treated.
While serving in the North East, some of the personnel could have developed physical and mental stresses as well as direct physical/combat injuries, the effects of which could last for a long period well after leaving the combat zone and hence, the need for the programme.
Declaring the programme open at 351 Medical Centre, Minna, the Chief of Medical Services (CMS), Air Vice Marshal (AVM) Saleh Shinkafi, stated that a team of various health professionals such as psychiatrists, physicians, clinical psychologists, counsellors and social workers has been constituted to conduct the de-induction programme.
According to the CMS, the NAF would take full responsibility for anyone found to have any medical problem now or in the future while there would also be close monitoring of their health for a few months after the programme.
While commending the returning personnel for their commitment, dedication to duties and sacrifices made in the fight against insurgency, AVM Shinkafi further stated that the re-integration process is part of the efforts of the current NAF administration to add value to the lives of the personnel.

What was stolen from former President Jonathan’s house, by aide