Abdulsalami Peace Committee in meeting with Osinbajo as ministers sworn in 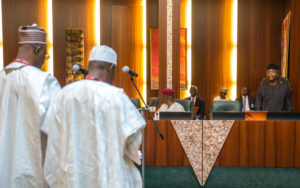 By Shitile Mbayansa, Abuja ‎
For two hours behind closed-doors Wednesday, the multi-faceted issues plaguing Nigeria was the focus of attention between Acting President Yemi Osinbajo and a delegation of the National Peace Committee headed by former leader, General Abdulsalami Abubakar (rtd), at the Presidential Villa, Abuja.
The meeting held shortly after Professor Stephen Ocheni from Kogi State and Alhaji Suleiman Hassan from Gombe State were sworn in as new members of the Federal Executive Council (FEC).
Abdulsalami Abubakar, when he spoke with journalists, would not divulge details of the meeting.
To the new ministers, Osinbajo said: “We welcome you to the federal executive council, were you have just been sworn in from ministerial nominees but now ministers of the federal republic of Nigeria. So, Prof and Alhaji you will not have time to celebrate much.
“The federal executive council is one that is committed to the very far reaching and reform Programme of this government. That reform Programme is contained in our Economic Recovery and Road Plan. We have focus our attention on key areas of that economic recovery plan and we believe those key areas are things that need to be done to make a difference in the Nigerian economy and in the lives of Nigerians
“We have issues and challenges here and there but these are, compared to where we are coming from, very minor…and we are tackling them on a day by day basis.”
“…we believe that the primary thing is for those of us who have the privilege of serving to ensure that by our own point and actions we support the anti corruption fight.
“Also that our conducts will be exemplary so that we will show by practice not just by words that we are determined to ensure that this country is run by a good government. And where there is honesty and integrity service will be delivered.”
Photos: Novo Isioro, Office of the Acting President.

Devaan says…. His family likes me, but he won’t propose