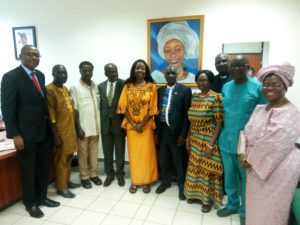 The CAN delegation with House of Reps members, and Hon. Beni Lar in the middle.

Following the protest by the  Christian Association of Nigeria (CAN), to the National Assembly on Wednesday, a way forward from the lawmaking perspective may be in the offing.
Senate President, Dr. Bukola Saraki, has promised the Senate will look into the 9-year Basic School Basic curriculum he says is not working.
CAN took its protests to the National Assembly over the controversial introduction of National Values/Civic Education in the school curriculum.
The subject, which is an amalgam of controversial and offending portions of faith, is compulsory a subject, irrespective of pupils’ religious beliefs in many States .
The CAN delegation took strong exceptions to some of the offending portions, which it said was inappropriate for Christian pupils. CAN has been lamenting that in some States, Christian students were being made to learn the fundamentals of another religion which were diametrically opposed to theirs and their parents.
Worse, these States refused to employ Christian Religious Knowledge (CRK) teachers, even where CAN offered a helping hand.
Leader of rhe CAN delegation, Prof. Charles Adisa, who also represented the National President of CAN, asked that “obnoxious laws” that trample on the freedom of religion be abolished.
According to him, the account of the birth, death, and resurrection of Jesus Christ had been fundamentally altered in one of the books in the new curriculum.
“There is a portion in the curriculum that encourages the children to disobey the parents if they are opposed to an issue. When an educational programme encourages rebellion in the home, what will be the implication?” he asked.
Adisa said CAN wanted IRK and CRK to be offered separately, while the federal and state governments should employ more teachers to teach the subjects that teach religions.
He suggested that Social Studies and Civic Education be merged into one.
In his remarks, Senate President, Dr. Abubakar Bukola Saraki, on urged all stakeholders in the education sector to remain calm on the new 9-year Basic Education Curriculum to enable the National Assembly look into the various issues involved.
Saraki, in a statement by his Special Assistant on Public Affairs, Mohammed Isa.
He assured the delegation that the Senate Committee on Basic Education would investigate the complaints by the Association against the new curriculum with a view to making it acceptable and satisfactory to all religions.
Explaining the background to the introduction of the policy, the Senate President said the process began in 2010, when the administration of former President Goodluck Jonathan came up with a series of reforms to reduce the number of subjects in the school curriculum.
“As leaders, we must continue to seek and find solutions to problems. You will remember that in 2010, the past administration came up with reforms on how to reduce the number of subjects at the basic education level.
“There were about 20 subjects at that time, and subsequently they were reduced to 12. In the process of implementing that reforms, we have this problem. Why I am saying this, is so we don’t leave here and believe that it was done to favour one religion over the other.
“Now the reform is clearly not working. So our responsibility is to look into that reform and make it work. I am sure that there was no intention to make one group feel disadvantaged with this new school curriculum. This is why this Senate will direct our Committee on education to look at the reform and find out why it is not working with the relevant stakeholders,” he said.