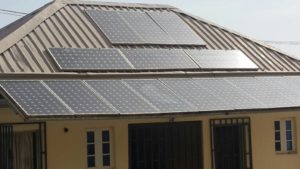 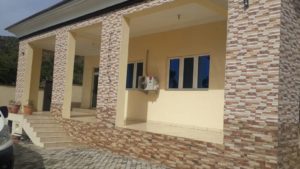 Side view with an air conditioner

At Last, A Truly Solar Powered Home in Abuja
The layout in Mpape District in Abuja looks like your average urban residence.
But there’s a difference. The fully functional four-bedroom bungalow depends solely on solar power for all its energy requirements 24 hours of the day and night.
This family house that has been sustained by solar power since 2013 is a living proof that you can go completely off the the public power supply grid as a choice. Yes, no utility (‘Nepa’) wires at all!
The Edaches, like other Nigerians, have had their fill of the epileptic power supply from the Nigerian public utility company. It was therefore not a difficult decision for them when they completed their 4-bedroom apartment in 2013 to run it on solar power from Day One.
According to Mr. Edache, “Initially we had to run generator for 3 hours every day to supplement the generation from the sun. Then we quickly ramped up and have since dispensed with the generator – in fact we have since lent it out.”
The self-sustaining automatically controlled setup comprises 5.8kWp monocrystalline solar panels, 65kWh of battery storage and two separate inverters. The installation which was carried out by a renewable energy start-up in Abuja, powers all the appliances including two refrigerators, one freezer, two air conditioners, one washing machine among other loads.
Domestic hot water is provided by a roof-top solar water heater while water pumping is handled by an integrated solar borehole pump.
“Considering the wide electricity supply-demand gap in a country that generates only about 30% of its power requirement with only 40% of the population having access to the hardly available electricity, self-generation, using solar energy which is abundant and green, is a no-brainer.,” an energy expert and owner of the home said.
He adds: “Even if you don’t go off-grid like this home , you can start with smaller systems that offset the deficits of the public utility you are already connected to. There’s no reason why shops and offices with essential tasks cannot take advantage of the daytime availability of solar instead of incurring huge fuel costs with the attendant noise and air pollution, not to mention the hazard of fire.”