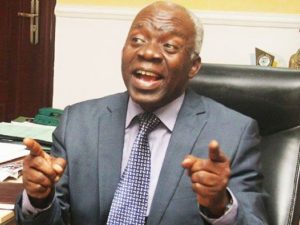 Lagos lawyer, Femi Falana is disputing the interpretation of the National Assembly that a judgment given by a Federal High Court in Abuja favours the powers of the lawmakers to tinker with and review budget figures. He is heading to the Court of Appeal to seek to upturn that judgment.
His statement, Tuesday, in Lagos coincides with the position of another Senior Advocate and Minister of Power, Works and Housing, Mr. Babatunde Fashola, questioning the powers of the Assembly to insert unsolicited projects in his ministry’s budget.
House of Representatives spokesman, Abdulrazaq Namdas, told Fashola last week that “the National Assembly is a national institution made up of members from all geo-political zones, they represent all tendencies, interests and ethnic nationalities. It has a responsibility also to ensure balance in the distribution of Road Projects and other developmental facilities. It cannot watch our national patrimony unfairly skewed to one region or a few regions to the detriment of other states and geo-political zones. The proposal from Mr. President on the 2017 Budget of the Ministry of Works, Power and Housing did not pass this test! This partly informed the intervention of National Assembly so that every region can be carried along in project allocation.”
Falana’s statement, Tuesday reads:“Sometime in 2014, I had cause to challenge the extent of the oversight powers of the national assembly to rewrite the appropriation bill or increase the budget estimates presented to it by the president. (See Suit No FHC/ABJ/CS/295/2014: Femi Falana v the president and three Ors).”
“In dismissing the case the respected learned trial judge, the Honourable Justice G O Kolawole questioned my locus standi to institute the action after he had described me as ‘a renowned human rights crusader’ and acknowledged my humble contributions to ‘the development of human rights jurisprudence in Nigeria’. In justifying the dismissal of the suit his lordship said that the reliefs sought in the case qualified me to be described as a ‘meddlesome interloper’.
“No doubt, the learned trial judge said that the national assembly is not a rubber stamp parliament. The incontestable statement has since been twisted to give the very erroneous impression that the power of the national assembly to increase the budget has been judicially recognised. With respect, the summary of the decision of the court by the national assembly is grossly misleading.
“In the entire 22-page judgment the learned trial judge never said that the national assembly has the power to increase any budget proposal submitted to it by the president. On the contrary, the federal high court made it categorically clear that the national assembly lacks the legislative powers to prepare ‘budget estimates’ for the president or ‘disregard the budget proposals laid before it and substitute it with its own estimates’.
“Even though I have taken the legal battle over the dismissal of the case to the court of appeal, I wish to state, without any fear of contradiction, that the learned trial judge concurred with my submission that the constitution has not vested the national assembly with powers to increase the budget.”