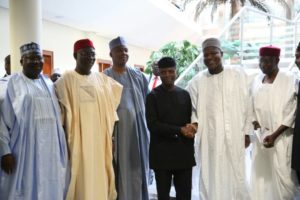 Those that witnessed the signing of Budget Bill into law. 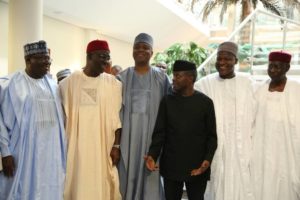 Nigerians wait to see if a ceremony in a conference hall of the Aso Villa will bring the much-needed breather in their financial situations.
Will the economy be reflated enough to end months of  excruciating financial tightness? Economists and analysts will begin to have a field day from Tuesday, as Nigerians wait with baited breath.
Seven months after President Muhammadu Buhari presented the 2017 Appropriation Bill to the National Assembly, it became an executable law after Acting President Yemi Osinbajo signed it into being late Monday afternoon.
Osinbajo got the processed document from the lawmakers three weeks ago, but off-the-grid negotiations were said to be on until House Speaker Yakubu Dogara let it slip late last week it would be signed this week.
The figure was raised to N7.44 trillion from the N7.28 trillion presented by President Muhammadu Buhari.
Those ar signing ceremony were Senate President Bukola Saraki, House Speaker Yakubu Dogara, Deputy Senate President Ike Ekweremadu, Senate Leader Ahmed Lawan, Senator Danjuma Goje. The Chief of Staff to the President, Abba Kyari, Head of Service, Winifred Oyo-Ita, Minister of Budget and National Planning, Udoma Udo Udoma, Minister of Finance, Kemi Adeosun, Minister of Information, Lai Mohammed, Senior Special Assistant to the President on National Assembly matters (Senate), Ita Enang, and Senator Phillip Aduda.

Five percent of Nigeria’s replacement generation is out of school; Saraki wants action