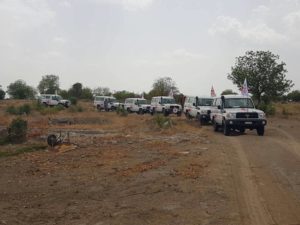 By Turaki Adamu Hassan
After three long years of agony, devastation and life in hell, today 82 Chibok school girls arrived Abuja following careful, secret and tedious negotiation that saw to the release of top Boko Haram suspects in the custody of Nigerian security forces.
Eternal gratitude goes to the Almighty God who has kept them alive, even in den of blood thirsty murderers these long three years.
The news of their release has not only brought joy to millions of Nigerians and citizens of the world who joined in the campaign to #BringBackOurGirls, but more especially their parents who waited for this moment with anxiety and trepidation.
Sadly, some of our Zion daughters may not meet their parents alive as a number of them have passed away owing to frustration.
Most importantly however, we should never forget to remember the ignoble, unfortunate, inhuman, sadistic and wicked role played some elements of the administration of former president Goodluck Jonathan, some who incidentally still remain in this administration,  who neither showed  interest in their immediate rescue, nor empathy for their parents but even tried, though unsuccessfully, to deny that such mass abduction ever occurred.
There are also unanswered questions about the culpability of officials of the state government.
It is rather unfortunate hearing some people criticising the government for releasing BHT in exchange for the Chibok school girls. They should instead put themselves in the shoes of the Chibok parents whose daughters were abducted for over three years now.
As a parent, will you have peace or sleep if any of your child went to school and got missing on way back in a city, let alone to be abducted by dreaded blood-thirsty terrorists as Boko Haram.  I am very much sure that parents can give up anything they have or own including their lives for their daughters’ freedom.
This is why President Muhammadu Buhari deserves our commendation, prayers and encouragement for his unrelenting commitment towards rescuing the Chibok school girls as promised.
Doing this is both necessary and obligatory especially for those of us from the North East whose region witnessed unprecedented devastation, mass killings and violence for more than five years.
As our daughters reintegrate into the society and reunite with their parents and families, may the peace of God from above envelop them; may they never see violence in their lives again; may they realise all their aspirations in life; may the wounds in their bodies, minds and souls be healed; may our land never ever witness such acts of barbarism and man’s inhumanity to man, again; may the remaining girls be released soon. Welcome home daughters of Zion.