As a pre-emotive measure, parents are keeping their chidren at home Tuesday, Everyday.NG has learnt from credible sources in the South-East geo-political zone.
This follows the momentum of activities between the security forces, and agitators for Biafra, who have issued an order for businesses to stay shut and for everyone to stay at home.
In fact, some schools have hurriedly scrambled and declared Mid-Term break for this week, a senior official of schools owers association said Monday night.
Agitators for the nation of Biafra, especially the Independent Peoplees of Biafra (Ipob) and the Police have been strutting the streets of major cities of the South East in an unabashed show of strength.
Said a source from the Abia State capital, Umuahia: “We don’t know how tomorrow (Tuesday) will be around the South East with Police and Biafra agitators in a show of strength parade. Haven’t seen these number of helicopters in Umuahia before. NNAMDI Kanu is in town in his father’s house. It’s likely the house will be condoned off by security operative before morning.
“The directive for Sit at Home by IPOB is likely to receive a very impressive support. Already many parents were calling to say they’re not comfortable with security situation and so may not take their kids to school tomorrow 30th May.
“Some school owners have actually declared Mid Term Break this week to forestall any eventuality.”

In Imo State, the Police frowned at statements​ and ​publications by IPOB​, MASSOB and Biafra Independence Movement,​ ​BIM, calling on everyone to sit at home Tuesday, 30th May, 2017 in remembrance of the struggle for Biafran Independence. 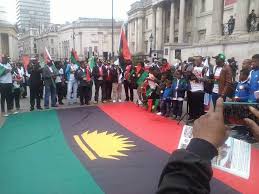 These publications are not only inciting but represent an unpatriotic and hostile propaganda against the sovereignty of the Nigerian State​.”

“The Inspector General of Police has already declared the publication and utterances illegal and deliberate attempt to disrupt public peace, safety and security.

“He has accordingly directed all State Commissioners of Police to place their States on red alert and ensure that these unpatriotic elements do not infringe on the rights of other persons and therefore cause a breakdown of law and order.”

18 years after, Military rule not an alternative to democracy – Moro