Copyright 2021 - All Right Reserved
Home Business Osinbajo in Buhari’s home state for SMEs, says he treats him like a son
Business

Osinbajo in Buhari’s home state for SMEs, says he treats him like a son 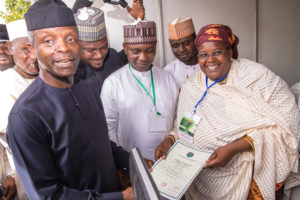 Ag. President Prof. Yemi Osinbajo issued a speedily-processed Certificate of Incorporation-within two hours of application- to one of the participants at the MSME Clinic in Katsina Thursday. 11th May 2017. Photos: Novo Isioro.

Press Release.
By Laolu Akande, Senior Special Assistant to the President (Media & Publicity), Office of the Vice President .
Acting President Yemi Osinbajo, SAN, has stated that President Muhammadu Buhari knows Nigeria’s capacity is limitless in terms of what we can produce, even as he disclosed that in his relationship with the President  in the last two years, he has been treating him more like a brother and a son.
The Acting President spoke as the Emir of Katsina Abdulmumini Kabir Usman welcomed him “home,” at his palace earlier today.
Speaking on the President’s convictions he said “when he gave the 2017 budget speech in December 2016, the President said the central vision of our government is to grow everything that we would eat and to make everything we would use.”
The Acting President said this today at a huge gathering of small scale businesses, industry and stakeholders across the public and private sectors involved in developing the micro, small and medium scale enterprises in the country at the launch of the Katsina State’s MSMES Clinic in Katsina.
The Acting President spent about two hours outside going round and interacting with the people at the stalls set up in the massive compound of the conference center at the Katsina State Secretariat Complex.
Prof. Osinbajo averred that the Federal Government’s newly launched Economic Recovery & Growth Plan (ERGP) places high premium on the nation’s capacity to grow it’s export potentials rather than continue on the unsustainable path of total dependence on import.
He said the focus of the Plan is to develop “the capacity of Nigerians to do everything that we need internally; to become a net exporter of the various things that we are importing today.”
Explaining Federal Government’s reason for the inauguration of the MSMEs Clinics that is now going round major cities in the country, Prof Osinbajo stated that it was designed to give small businesses the opportunity “to meet with the industry regulators, to talk to them and to hear their problems”, adding that he was so excited to see not only business men but women who are focussed and serious about their businesses.
He explained that the idea of the MSMES clinics which he has personally attended for the fourth time now is the Buhari administration’s effort to close the gap between MSMES and relevant FG regulatory agencies like NAFDAC, CAC, SON, BOI, FIRS and others and ensure that those agencies become facilitators of businesses not obstacles to business development.
Giving an insight on the personal and official relationships he has shared with the President, Prof. Osinbajo disclosed that ” the President has been treating me as a brother. In fact the President has taken me as a son in the way he treats me.”
Continuing the Acting President noted that going by the amount of responsibilities President Buhari has given me, it shows that he seriously believes that we can live as brothers in this country. He seriously believes in the unity of Nigeria. I pray the Lord will preserve our President to continue to lead us just as the nation has voted him to do.”
The Acting President who earlier paid a visit to the Emir of Katsina, Dr. Abdulmumini Kabir Usman, also spoke about his close relationship with President Muhammadu Buhari at the palace reception saying “one of the reasons why I feel very much at home in Katsina State is because this is the State of our President, President Muhammadu Buhari, who has taken me more like a brother; in fact sometimes more like a son than a Vice President.”
He commended the Government and people of Katsina State for being a role model in terms of peaceful co-existence of all ethnic tribes and religions in the State.
Prof Osinbajo who declared the MSMEs Clinic open, was accompanied to Katsina by the Minister of State for Aviation, Mr. Hadi Sirika, Minister of State for Industry, Trade and Investment, Hajia Aisha Abubakar, Chairman of Federal Inland Revenue Service, Babatunde Fowler and Special Adviser to the President on Political Matters, Senator Babafemi Ojudu.
He also spoke about the imperative of a one indivisible and united Nigeria, emphasizing that the nation’s diversity is its strength and noted that “Katsina State is the home of a United Nigeria.”

FG Insists on Secret Trial of Dasuki, Judge to Rule on Mode of Trial