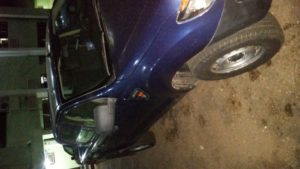 A group styling itself the Buhari Campaign Organisation (BCO) is in soup after ramping up a bill of nearly N2 million in an Abuja hotel, City Capitol Hotel, and refusing to pay.
The hotel has seized a pick-up van with  belonging to one of its officials after its national co-ordinator Alhaji Isa Aminu Bayero took off for another hotel and left the Chairman, Board of Trustees (BoT) to pick up the bill.
An attempt by the Police of the Wuse Divisional headquarters to effect the release of the seized van was thwarted by the hotel which allegedly exerted superior police influence.
Bayero said on phone that the organisation was aware of its indebtedness and would pay up when its finances improved.
Reminded that the presidency said it was not aware of any organisation like his, he directed Everyday.NG to the All Progressives Congress (APC, while throwing around the name of a famous relative of the President.
Alhaji Kabir Nakaura, the Chairman of the BoT of the organisation could not be reached at press time.
The management of the hotel said the organisation approached it in March asking for a partnership to house and feed its officials for a period of time.
“At the end of the period, we asked for payment, but instead they asked for an extension of the credit facility. We began to take measures to get our money back, but only succeeded in getting N100,000.00 back, and this was paid by an embarrassed APC member from one of the South-Western States who was in our hotel for his own private business. He was embarrassed that the name of the President was been dragged into the ugly situation,” the hotel’s general manager, Mary Essien, said.