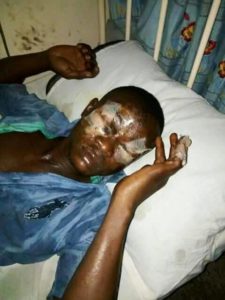 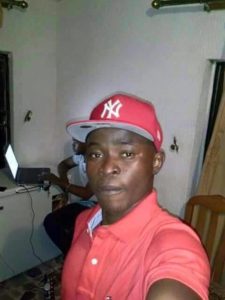 Ossai, before the attack.

By Okey Ifeacho.
INSPECTOR GENERAL OF POLICE URGED TO ARREST NWIKE OGENE FOR ATTEMPTED MURDE
The Inspector General of Police has been urged to arrest and prosecute Nwike Ogene for attempted murder and causing grievous bodily harm on Emmanuel Ossai.
Nwike Ogene allegedly attacked Emmanuel Ossai with acid while he was on the farm. Sympathizers who heard the wailing of Emmanuel Ossai rushed to the seen to assist him to the hospital.
The victim who is presently receiving treatment in a hospital is feared to have lost his eyes and the alleged attacker has since run away from Atani community in Anambra State.
Chief Godwin Achike who is the clan head of Umuoniha kindred in Atani, Ogbaru Local Government where the victim and alleged attacker hail from said Nwike has been terrorising the community for a very long time and efforts to bring him to book has failed because of alleged compromise by security agents.
On April 12, 2016, the Igwe (ARC) of Atani, Augustine Azuka Ngoddy (Eze Ogwuike 11 of Atani Kingdom), wrote a petition on behalf of Atani community against Nwike Ogene and four others to the Inspector General of Police asking that Nwike and others suspected to have attempted drowning a woman and kidnapping her three children be investigated.
In the petition, the Igwe said, “Atani community has been a community free of crime of kidnapping and abduction of persons and child trafficking as compared to other communities in Anambra State, but that has changed in recent times. Atani has now become a breeding ground for kidnappers, child traffickers and abductors of persons and all sorts of crime.”
“The most surprising aspect of the scenario is that when suspects are arrested by the community Vigilante group and handed over to the Police, be it in Atani Division or Anambra State Police Command for investigation and possible prosecution, within a blink, those suspects will be released by the Police. The suspects like Nwike Ogene will then return to Atani to harass and intimidate persons they perceived to be against them.”
Ogene was alleged to have masterminded the kidnap of a woman and her three children. The community vigilante group arrested him at Ozubulu where he ran to and handed him to the police but was soon allegedly released without charge. Before his arrest, Nwike Ogene was said to have made calls to some people that he has made consultations with relevant people and he will be released whenever he is caught. Since Nwike Ogene was released by the police he parades the town boasting that nothing can be done to him.
Chief Achike said if the Police had done their work diligently, Nwike would have behind bars by now and would not have attacked Emmanuel Ossai causing him his eyesight.
The immediate arrest and prosecution of Nwike Ogene by the Police would save Atani community the possibility of breakdown of law and order, community leaders said.

Get it right before opening your mouth on PIB, Senate tells Kachikwu