Former Gombe State Governor and sitting Senator, Danjuma Goje, has been lamenting The harrowing experience the police subjected his children, claiming they removed N18 million, $19,000 dollars, documents, among others from his house.
Police detectives stormed Goje’s Asokoro residence last week, according to them, based on a whistle blower’s information.
He told journalists on Wednesday: “The police prevented them from entering the house. They took them there beside the gate and those children stayed there for three hours, hungry and thirsty in front of their own house because they were searching the house and they were not allowed to go in
So after this horrifying four hours whereby my family was traumatized and within these hours my well-wishers inside and outside the country were traumatized because the story had gone viral when the operations was going on and I also informed the Senate President immediately the thing started. I informed the Speaker of the House and Mr. (Senate) President made all efforts, he contacted all relevant agencies including the Vice President, everybody was turning to the EFCC and we realised that it was the police but the operation went on.
“The Speaker did the same thing, he tried to get everybody, DG, DSS, the vice president but the operation continued. At the end of this horrifying four hours the police left as me and members of my family completely traumatized and frightened, my children, my grandchildren totally frightened, everybody in my house were totally frightened. My well wishers both inside and outside the country became frightened.
“What were their findings? I told you we were more than 50. So the money collected in the house was N18 million, they got  $19,000 and four thousand Saudi Riyals and they went with all these things. In addition they also took my laptop, and to make matters worse they took 18 files from my office because I am so traumatized now and I don’t know which files is missing, which files is available now. Some of these files have to do with the work I am doing.
“Like I told you we are holding a meeting with the budget on Thursday so from Thursday to now we have not been able to meet because some of the papers are not around, many of us are traumatized. My house as a politician is a beehive of activities, people are coming from all over the country to sympathise with me. I have no time to sit and from today we are trying to start sitting again as appropriation committee to see what we can do with the budget.
“I want to apologise to my colleagues that we could not keep to the timetable you gave us to lay the budget yesterday and to get it passed today and I think it is not our own fault, it is the fault of the police because the police interfered with the whole of the budget process and I hope Nigerians will not turn out to blackmail the National Assembly because the process were truncated by the police. ” 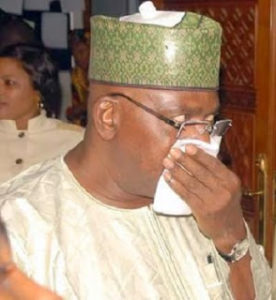 FEC meets without Buhari, who will now work from home