Osinbajo, a Pawn in the latest Complex Power Game?

By Ariyo-Dare Atoye
Naivety is not an excuse in politics and certainly not after spending about two years in the topmost level of powers. Vice President Yemi Osinbajo is certainly learning the ropes; but how very fast is only known to him. He could only be on top of his game in the nasty days ahead, in dealing with people who are vociferous about using powers to peddle influence and undermine anything. No doubt he had, in acting capacity as a President for 50 days less, demonstrated, affectionate capacity to preside over the affairs of Nigeria, but the covert side of power play is far more than that. It is wickedly sophisticated in our clime. The daunting question is, has he, reasonably, learnt how to navigate the dangerous bend of power politics which is trapped with deadly potholes? This road destroys if; you do not know how to maneuver it with the right speed and sense.
The VP has been saddled with a delicate task of unraveling the mystery behind the huge cash discovered in the Osborne Apartments in Ikoyi, Lagos State and to equally untangle the invasive scandal of grass cutting business allegedly awarded to self, by the now suspended Secretary to the Government of the Federation, Mr David Babachir Lawal. This assignment is deceptive and is laced with some elements of conspiracy on all sides. It would require sound political wisdom for the Vice President to come out of it unscathed. He is presiding over a committee in which the remaining two other members have some level of interests and involvements in the matters under investigation. Caution.
While the villa, albeit pretentiously, and some very naïve persons had bandied the rising unassailable and adorable image of Osinbajo as the reason for being saddled with such “an unnecessary” task, the covert motive is very well known to the schemers. Remember the impulsive echo of Babachir Lawal: “Who is the Presidency?” While we were busy scolding him for that pregnant statement, he had strategically “unleashed the dragon,” by confirming the “government within government,” allegation once made against the executive by the President of the Senate, Bukola Saraki. Aso 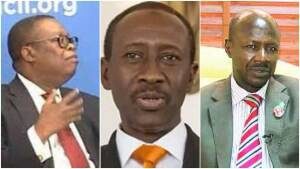 Rock has become a den of a few influence peddlers and power mongers who would continue to take advantage of our indisposed President to run the affairs of the state by “working from home.”
In this unfolding tricky complex game, did Osinbajo really know, and has he ascertained who the Presidency is that constituted the panel and the underlying motive for it? There would be no excuse in future for a Professor of Law that he was used as a pawn by influence peddlers in a hatchet task. And if he is unaware, this is the time to put on his thinking cap to discreetly unravel the web of conspiracy spiraling around the seat of power. You don’t need to be a lawyer to know that the Osinbajo panel is inconsequential to the extent of its formation. The VP is advised to do his own backend findings, including the slant in commentaries by pro-establishment writers and commentators.
This administration is soiled in divisive religious card; it is yet to acquit itself of some allegations bothering on parochialism and religious bigotry. Babachir Lawal has seen fellow cabals in the administration getting away with worse acts in a circle of impunity, and the system came out to defend them vigorously. He is still startled as to why his own should be different as member of the cabals. But I always knew that Babachir would be used as the “fall-cabal,” someday, and sorry to tell him that, there are some cabals who are more equal than other cabals, and coupled with that, he is from the “guinea pigs” Christian minority, of the Hausa/Fulani dominated Northern politics.
The top members of the club have found him suitable for the much-expected political sacrifice to remedy a discredited anti-corruption campaign and a failing government. The Pastoral garb of Osinbajo, a Christian leader in the administration was found to be helpful enough, to sacrifice and exit Lawal from the notorious league of the presidency cabals, and equally neutralise the emerging allegation of “because he is a Christian” biases in the media.
It is obvious that the suspension of Lawal by the same system that had, through the Attorney General of the Federation, Ababukar Malami, previously cleared him on allegations made by the Senate, is curious, suspicious and indeed an afterthought. But it is my take that Lawal and those who are found to have betrayed public trust deserve to go, but it should not be to the exclusion of other “sinful cabals,” because of the content of their bio-data. This may apparently be the worries of the suspended SGF.
In a similar fashion, the Director General of the National Intelligence Agency (NIA), Ayo Oke, is also in a shock over his suspension. The media is awash with a claim that he had appropriately informed the National Security Adviser, Babagana Moguno, about the Osborne “covert” cash. The NSA on the hand has not denied this media report and back-channel information that he indeed had knowledge of the cash. The superior information remains that the Presidency was aware of the money via the NSA.
The question then is, why did Magu ignore the Galton’s whistle in the security circle and deliberately moved after the cash to burst “something?” Is it a payback? Yushau Shuaib, a media expert who had previously worked with the office of the NSA, in his latest article titled “That NIA’s Black-Budget and Mysterious Whistle-blower,” said something very instructive
“The incident is coming at a period of an intense inter-agency rivalry where security agencies were allegedly reported to be behind the leakages of classified and confidential information to smear their perceived oppositions within the same government….. With all fingers pointing to the fact that the money belongs to NIA, the burden of proof is who is the mysterious whistle-blower? Could the whistle-blower have acted on behalf of an agency engaged in the rivalry or was it as major counter-intelligence operation by foreign interests to expose and embarrass our intelligence network?”
The VP doubles as the most senior legal mind of the administration, but if he had accepted the headship of a needless committee in order not to be misconstrued; there was no justifiable reason in accepting the membership of the AGF on that panel. Also now that emerging facts have confirmed the culpability of the NSA in the “Black Money,” why then is Osinbajo still carrying on with these two “culpable” figures without asking the President to excuse them?
The whole truth concerning the attached interest to the Osborne cash may never be uncovered under the Buhari’s administration, except maybe if, the Senate decides to investigate the matter thoroughly through a bipartisan committee. However, legislative inquiry itself is not a full guarantee of full disclosure. But one day the truth will come out. However, Osinbajo must be very wary of the sharp political bends ahead of him. Truth and audacity in humility are sacrosanct.
* Atoye contributed this piece from Abuja via aristotle001us@yahoo.com

Nigeria at a crossroads, by Atiku Abubakar